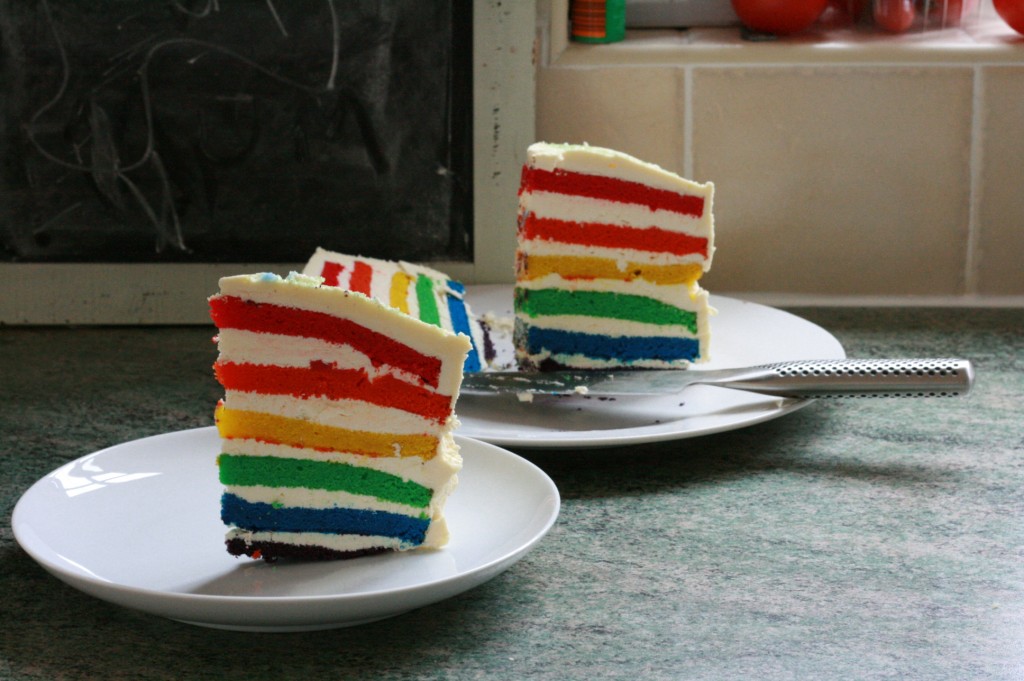 Will had his 30th birthday in May and because I’m an overachieving sort of wife I decided I wanted to make him a rainbow cake. You know, the one that’s all over Pinterest that looks like it was made by leprechauns or fairy party planners? That one. I bought some fancy pans and then realised I was 39 weeks pregnant and more suited to watching repeats of The Real Housewives. So the rainbow cake idea was shelved for the time being. 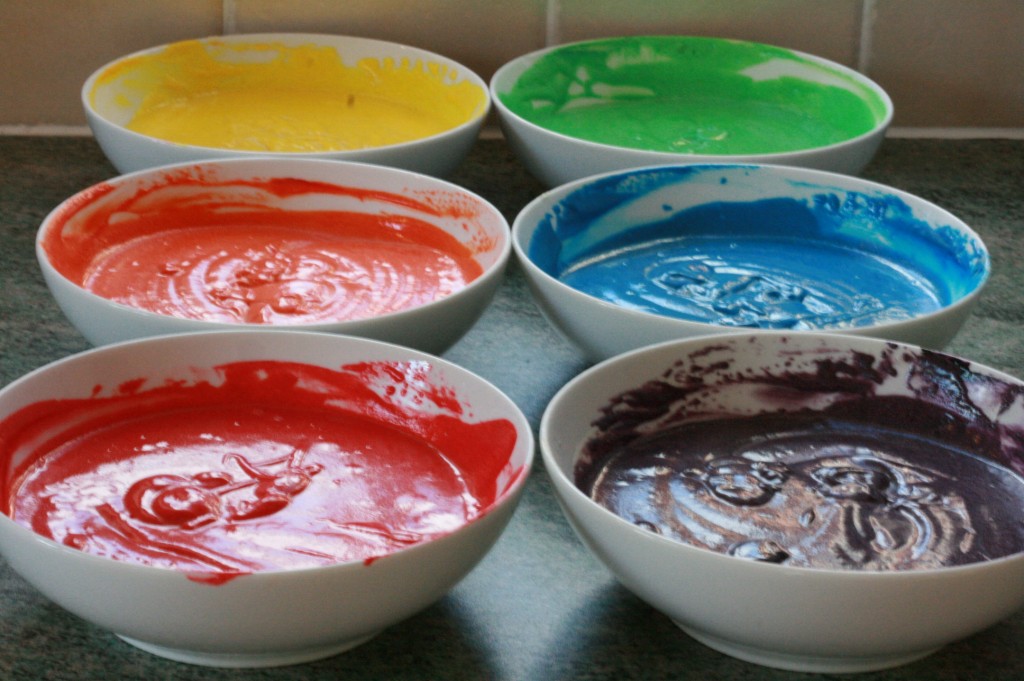 For Elfie’s first birthday last year I mastered cupcakes so I thought it would be nice if I upped the ante and re-visit the rainbow cake idea for her 2nd birthday which we celebrated along with my Dad’s birthday this weekend (a little early as Will has to work on the day itself). A bit of a tall order for someone who really dislikes baking – I hate how you have to be SO EXACT with everything – but I love a challenge. 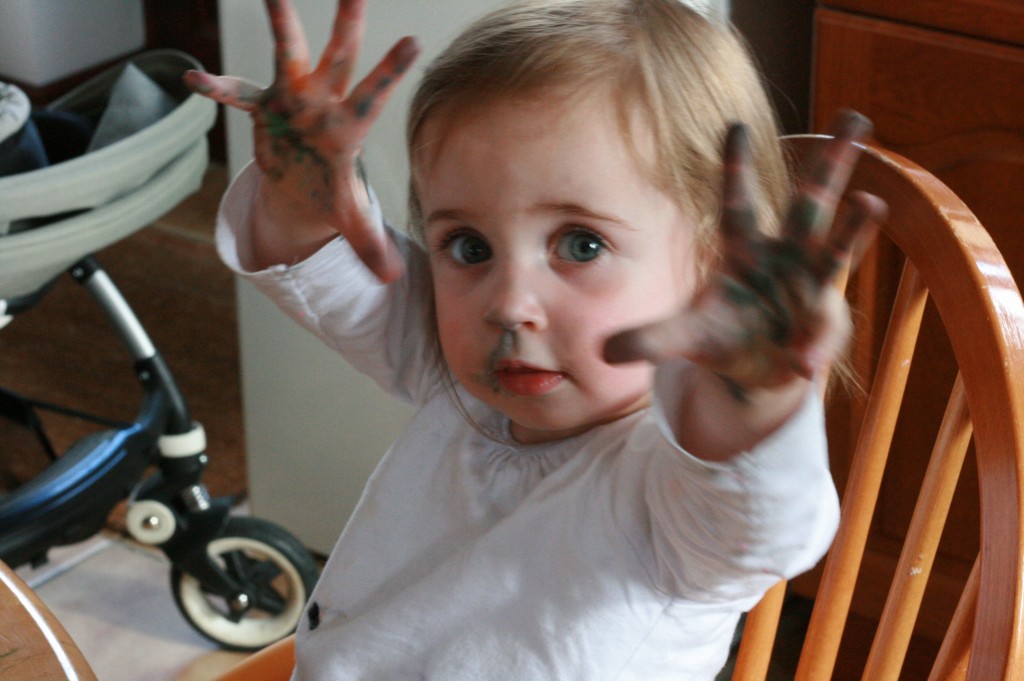 So I decided to make the cake last Friday. I had my trusty assistant Elfie who I set up with colouring pens and Hux who was not so trusty and wanted to be worn on my front the whole time. Luckily I seem to be able to carry out all my daily tasks with a baby on my front these days (including peeing), so we were good to go.

I got hold of my birthday party supplies used this recipe from Whisk Kid which appeared to be the ‘original’ rainbow cake, as seen on Martha Stewart’s TV show. I read the recipe over and over again and studied this tutorial for Swiss Meringue Frosting – most helpful. And so it began. 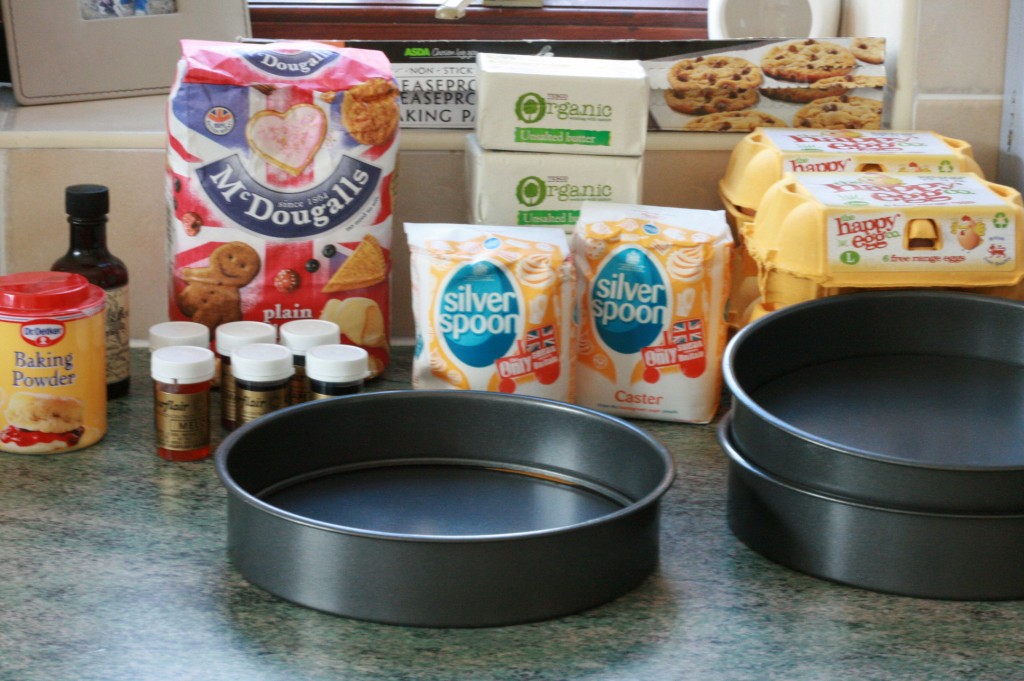 The one thing about this recipe is that it takes A LOT of ingredients and cake making supplies. 18 egg whites (no yolks!), 4 packs of butter. Nearly a kilogram of sugar. It’s not one for dieters, that’s for sure. The cake gets its vibrant colour from gel food colourings and this is one thing that is non-debatable; liquid colours just won’t cut the mustard. I bought mine from this seller on eBay and they worked really well. The recipe specifies lemon flavourings but I used vanilla in its place.

Another point I didn’t scrimp on was the greasing and lining of the baking tins. When I’m making a normal victoria sponge I usually don’t bother lining the tins with baking parchment (probably why they always stick) but this time I greased the tins, lined them, then greased them again. 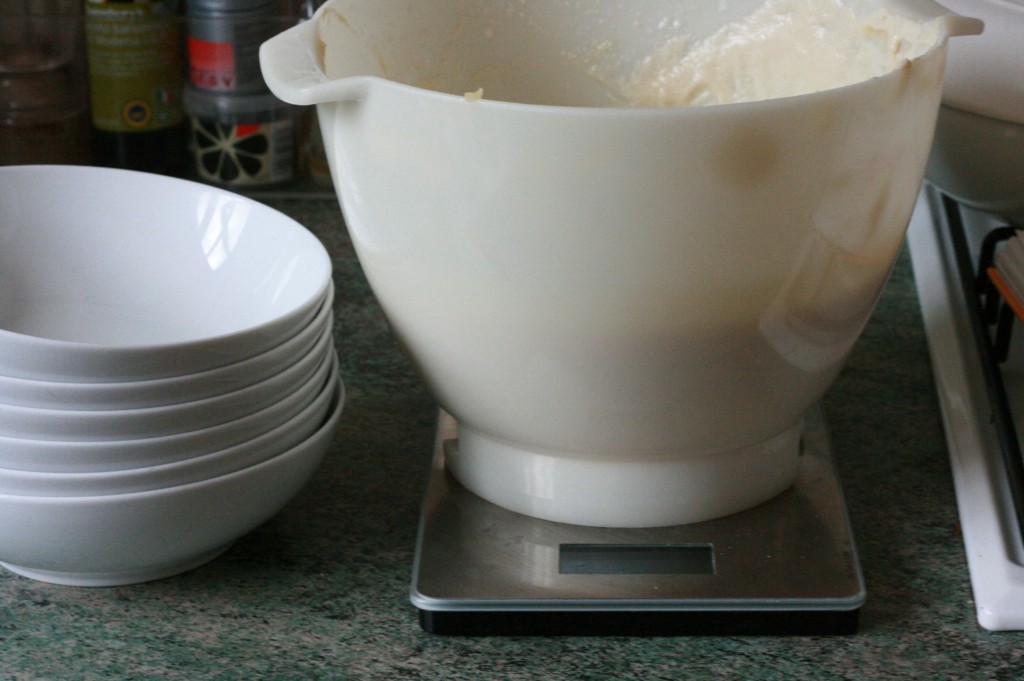 As per the instructions I weighed my mixing bowl before beginning to put together the white sponge. By doing this you’re able to find out how much finished mixture you have, therefore dividing it equally between six bowls ready to colour. My bowl was 600g and I would need 260g of batter per portion. I measured out 255g each to allow for a little wastage (this was a wise move). 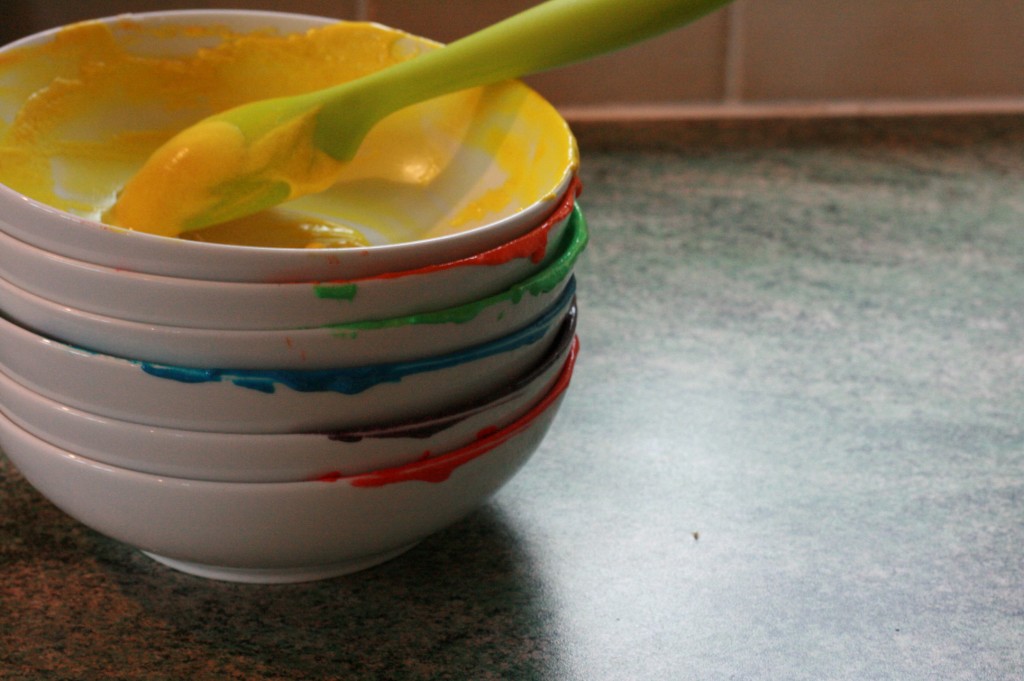 I then added my colours (TOTALLY the best bit), half a teaspoon-ish per bowl, and mixed well. It was pretty awesome to see how vibrant the colours were, all ready for the oven.

I only had three baking tins so I cooked the cakes in two batches. The recipe specified 15 minutes at 350 degrees F but I found they needed 17 minutes at 170 degrees C. As I’m so terrified of baking going wrong I watched the sponges like a hawk until they were JUST done. When they came out of the oven I let them sit in their tins for 10 minutes before turning them out onto a wire rack to cool. 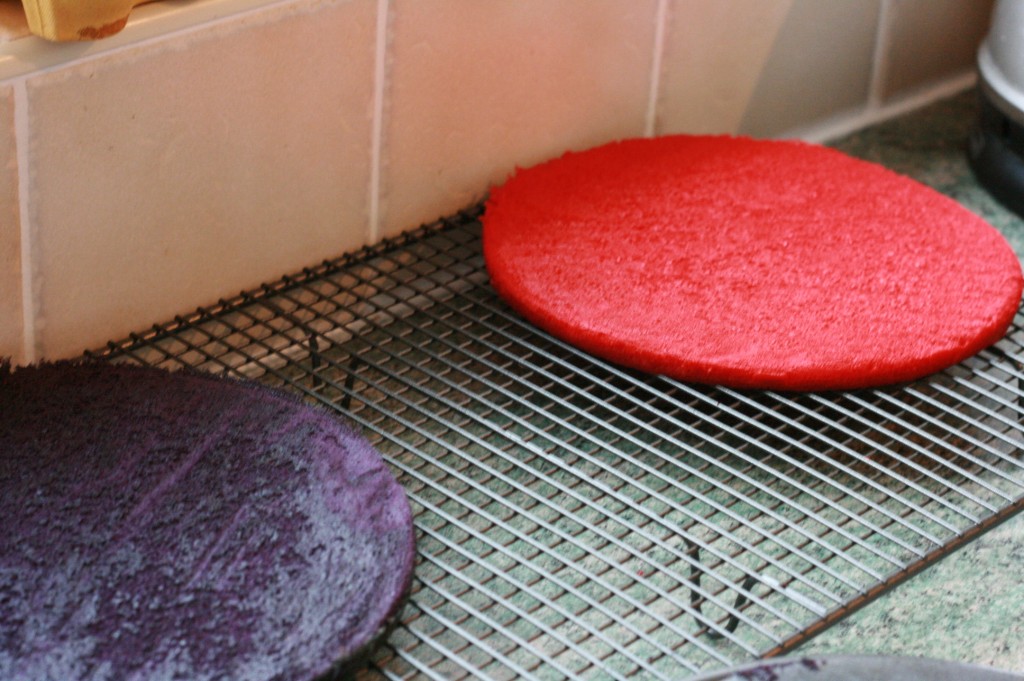 And this is where it goes a little bit wrong. The recipe specified popping the sponges in the fridge to cool so I piled the sponges one on top of the other so they’d fit. This was a bum move; the purple and red layers completely melded to each other and I had to do them again. Luckily I knew I needed my 255g of batter per portion so it was easy to whip up another batch but it was bloody annoying to say the least. I’d recommend cooling the layers on a wire rack and not putting one on top of another until you’re ready to build the cake. 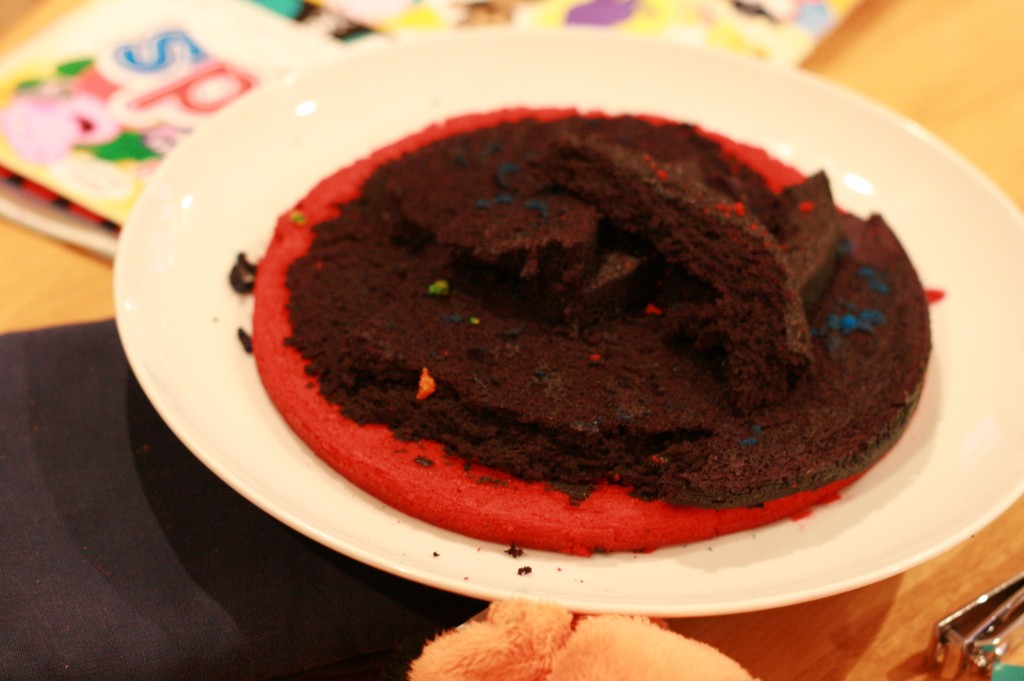 This was about the point when Will came home to find my trusty assistant tearing up newspaper in the lounge one and a half hours past her bedtime. He was not impressed with my mothering skills then, but goddammit MY CAKE HAD BROKEN. This is when I had to pour a glass of wine.

I was planning on storing the sponges overnight ready to ice in the morning, but with no idea how to do this best I decided to frost the cake to the crumb coating – which I discovered is when you put a very thin layer of frosting all over the cake which stops crumbs coming away and ruining the rest of the top layer of icing (thanks, Martha Stewart). 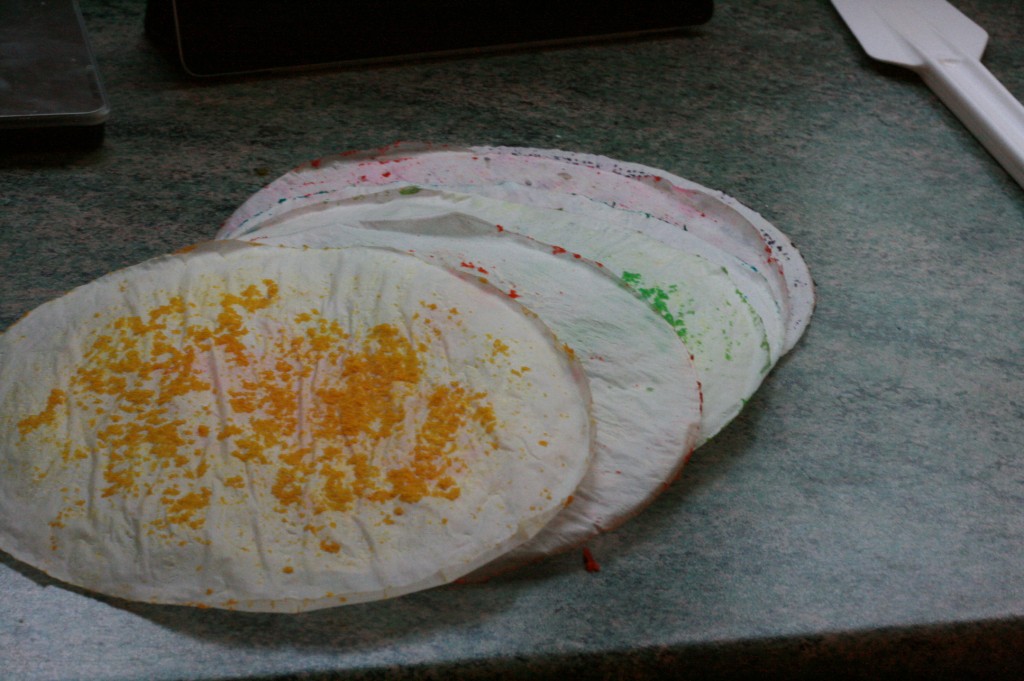 Surprisingly enough I managed to proudly make the Swiss Meringue Frosting without incident and fill the cake. I can’t say enough times how great this tutorial was and it worked brilliantly. Someone commented on Instagram that it might be a good idea to weigh out the frosting as I did with the batter so all the layers are equal which I initially thought would be a bit OTT but I think I’d definitely do this if I made the cake again. 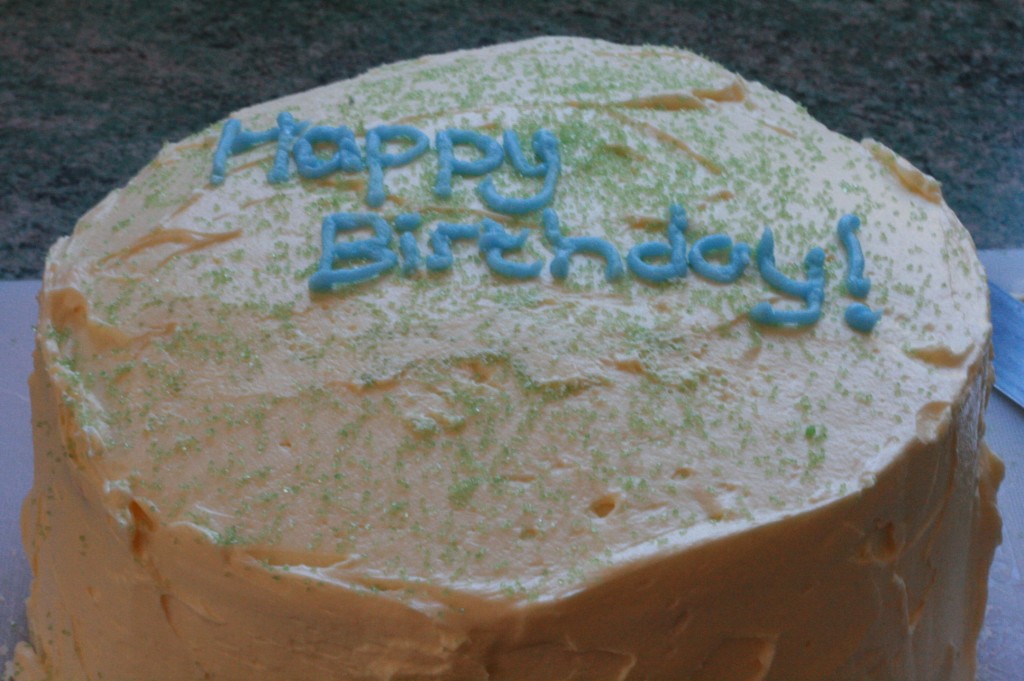 The next morning I drove to my Mum and Dad’s house to borrow a palette knife, slapped the icing on and sprinkled some coloured sugar on top before piping ‘Happy Birthday’ on top. Icing letters are HARD. I transported it in the car on a chopping board, thinking anything else would be a bit too slippy and risky; I would’ve been heartbroken if anything had happened to it and all plates and cake stands I could get my hands on were too shiny. Apparently a good way to ice the cake without making a mess is to lay some sheets of baking parchment on top of the surface you are using.

The wow factor when the cake was cut into was A-MAZING. Nobody expected to see a multicoloured cake and the vibrant colours were wonderful. Here are the token hipster Instagram photos I took at the time: 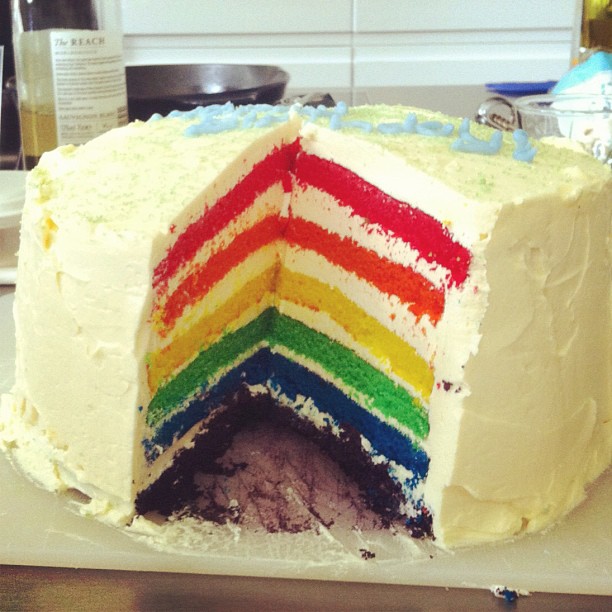 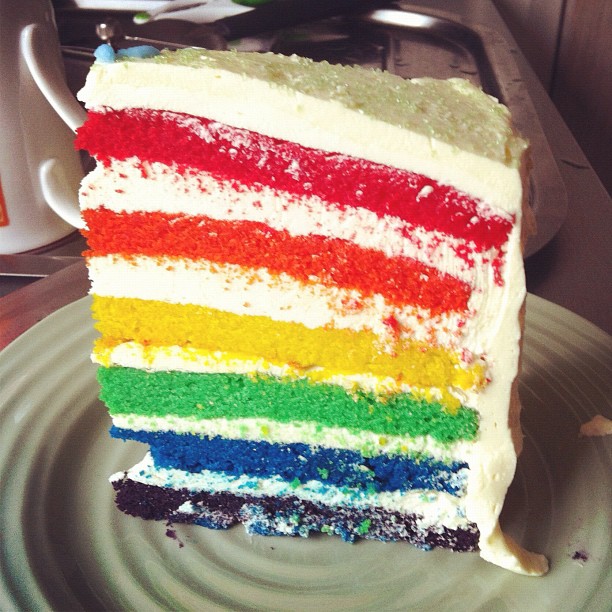 How to become a flexitarian

It tasted pretty good: there was no hint of the colourings in the flavour which was my main worry. The sponge was nice and fluffy and the frosting creamy and delicious. It was very very sweet – how you would expect an American cake to taste I guess – but everyone seemed to like it. 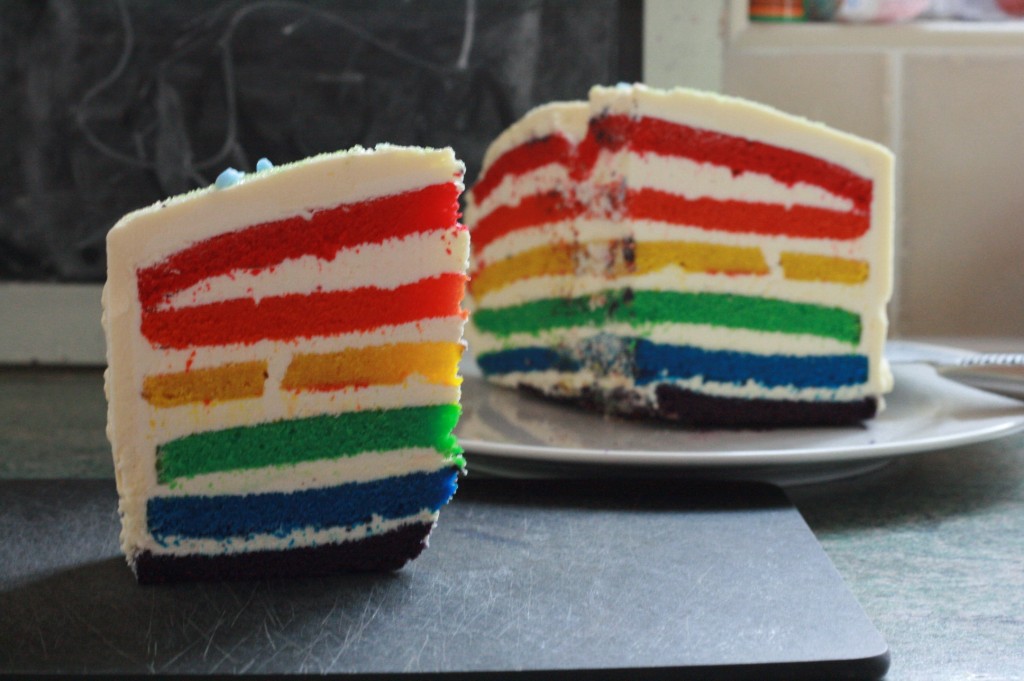 Would I make this cake again? Definitely. It’d have to be for a person I liked a whole lot – it’s not for the faint hearted – but it would to be great to improve on a couple of things (like the slightly cracked yellow layer you can see in the above photo, and more frosting on the orange layer so the red one doesn’t dip as much). I’d love to try it with Delia’s all-in-one sponge recipe with a reduced amount of sugar in the cake and frosting and would also like to try the cupcake versions as well.

But then again, I’m the girl who hates baking. I might just stick to slow roasting meat, though a joint of pork belly with a birthday candle in doesn’t have quite the same wow factor.

1.  Preheat the oven to 170C degrees. Oil and line how ever many 9” cake pans you have (I have three and I just washed and reused them).
2. Sift together the flour, baking powder and salt. Set aside.
3. Cream the sugar and butter, then add the egg whites a little at a time. Add the vanilla and mix until fully incorporated. Then, alternating between wet and dry, add the milk and flour mixture in two parts.
4. Divide the batter amongst 6 bowls: weigh your mixing bowl before you begin adding ingredients and then subtract the weight of the bowl from the final measurement after the batter is completed. Divide that number by six and add that weight of batter to each bowl leaving a little over for wastage.
5. Whisk about half a teaspoon of food colouring into each bowl. Keep in mind that the color of the unbaked batter will be the color of the baked batter. Pour into the pans and bake for 17 minutes each.
6. When you remove them from the oven, let them rest on the cooling rack, in the pan, for ten minutes. Then flip on to the wire rack and leave until cool.

Swiss Meringue Buttercream
This makes A LOT of Buttercream so it’s best to make it in two batches, the first to fill and crumb coat and the second to frost.

Cook the egg whites and sugar in a small saucepan over medium heat, whisking constantly, until the sugar is completely dissolved (test by rubbing some between your fingers. If it’s completely smooth, it’s done). If you want to pasteurise the egg whites make sure they’re cooked to 160 degrees C. Pour into another bowl (a stand mixer is preferable) and whip on high speed until room temp. Then, on a medium-slow speed, add the butter, waiting until each piece is completely incorporated before adding the next. Refrigerate the frosting for about ten minutes. Turn the mixer back to high speed and whip until the frosting it has come together and is fluffy, about five minutes. Add the extract, beat briefly and then use.

Assembly
Stack the layers in your preferred order and fill and frost.

Once frosted, the cake can be left on the counter without any problems, but feel free to refrigerate it. I put it in the fridge to make sure the frosting was robust for the journey to my parents house. Just be sure that the cake is at room temperature when serving or the frosting will be hard, not smooth.