It’s no surprise the UK has one of – if not the worst – breastfeeding rates in the world. Though 81% of mothers try breastfeeding at some point, only 34% are still going at six months and one in 200 after a year*, something I’ve been thinking a lot about as World Breastfeeding Awareness Week comes to an end.

So why is this?

I breastfed both my babies to some extent; Elfie was very poorly as a baby so we only managed a few weeks,  and I lost my supply at around 4 months with Hux. As he seemed much happier being supplemented by formula I went with it, and finished breastfeeding completely at around six months.

And I felt awful about ‘giving up’ both times.

In my opinion, part of the reason why these rates are so low is because of the way breastfeeding is fetishised in our society. I don’t mean in a ‘cor, look at the baby milking boobs on that’ kind of way, but in the sense that we forever have the ‘breast is best’ choked down our pregnant hormonal throats.

Breastfeeding mothers are always lauded as the ultimate mothers: much in the way that, though we pretend it doesn’t happen, a non-medicated vaginal birth is seen as more ‘authentic’ over an elective c-section, because of what we’re fed by our media we automatically place a breastfeeding mother above a bottle-feeding one in our internal mothering league table.

The thing is, it’s all well and good for us to celebrate breastfeeding women because it is arguably the best thing we can do for our babies. I love breastfeeding and if I’m able, would always choose to feed my children this way. But the problem comes when our local health services can’t give us the back-up and support we need in this journey.

When I started breastfeeding for the first time I was amazed by how unnatural it felt. A process that I’d been told was the most natural thing in the world felt downright bizarre to me, as I was expected to let a baby go wild on an area that had barely been seen by my husband and best friends before, let alone anyone else.

First off, there’s the pain of it. Before I gave birth and attempted breastfeeding myself nobody had mentioned just how much breastfeeding would hurt. I’m not joking when I say this was the worst pain I’d ever experienced: picture someone pulling barbed wire through your nipples then you’re pretty much there.

Then there’s the bleeding – standard, when you’re going through that much pain. Then following the bleeding were the cracked and peeling nipples, with it coming more pain as you’d expect when you stuck a suckling mewling baby on to a part of your body that is weeping and open.

Because of all the pain and bleeding and cracking, I pretty much felt like a failure at breastfeeding from the off. Both times I would cry in anticipation of the toe-curling agony that would start as soon as the baby latched on. And I found it really hard to get support in what was a time I was hurting and confused: how could something that was supposed to be so good for my baby feel so bad for me?

Looking for support I went to my Health Visitor. The professional I was assigned when Elfie was a baby was – and I say this with the most utmost respect of the medical profession – as useful as a chocolate tea pot. I had a very ill baby and was given the most harmful advice, told to stop bothering the doctor with my baby’s weight loss and was treated as a neurotic new mother. It was altogether a horrendous experience and led to me losing a lot of trust in those who were supposed to be there to help. 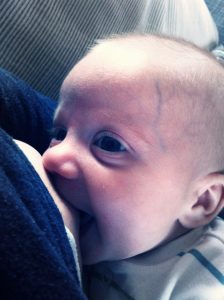 The situation was slightly more positive when Hux was born as I had a local baby group that I almost enjoyed, and though I asked for advice on my breastfeeding situation I felt too self-conscious to get my nipples out in front of a room full of women. When my supply started dwindling post a bout of mastitis at 4 months I was told to rest up in bed and eat and drink more, but with an active 2 year old, a whacking case of PND and an impending divorce that wasn’t about to happen.

As we tend to do when we feel at our lowest, I looked at the other boob-slinging women around me, whose babies effortlessly latched on to their nipples got their daily calories from their milk. The breastfeeding mothers I saw around me and online made the whole thing look so easy.

Hux, His Spoon, And Why I Will Never Label My Children

Giving birth for the first time at the age of 24 I wasn’t the most forthright or brave person (how times change!) so quite frankly, I was terrified of attending a breastfeeding group for advice and support. I had visions I’d turn up to a group of women sitting in a circle, milking each other and singing kum ba yah. I have obviously unearthed my head from my bum and know that’s not how breastfeeding groups work, though sadly  they’re being slowly shut down (lack of funding, thanks austerity), at least in my area.

In addition, since my children were born Social Media has been revolutionised. It’s been six years since I last fell pregnant and since then a whole new world of community and online support has grown. I’d hope that, should I be lucky enough to expel another child from my body, that I’d know where to go online to help pick me up and ask for help at what is quite frankly a really scary and painful time.

Which is how I guess I’d like all new mums to feel: supported, able to access the friendly ear they need. Motherhood isn’t easiest even in the very easy times, and it’s so sad to think how alone I felt when it came to my breastfeeding journey.

Ask Instagram, ask Twitter… heck, ask me. Go to your local Kum ba yah group or find a La Leche consultant near you. Don’t buy into the fact that breastfeeding a child for any amount of time is the easy thing to do; it’s a physical and mental challenge, whether you have bleeding nipples, mastitis or a poorly baby. If it helps, put the money you’d otherwise spend on (expensive) formula into a pot and treat yourself to something nice for every month you get through: the small bit of motivation from this helped me no end.

Breastfeeding was the first difficult journey I went through on my path of motherhood. Had I faced it knowing just how tough it would be I wouldn’t have been so hard on myself and would have had way less of a tendency to feel disappointed in my skills as a mother. Which I now know are as brilliant as any other mum out there, breastfeeding or not.

Breastfeeding In Public and that Sports Direct Debacle