If you click this website’s links I may earn a small commission.

I am one of those people who in the past has suffered with what you might call ‘ostrich tendencies‘. You know what I mean: when something bad is happening, if you just look the other way it doesn’t exist.

In my past that has mostly applied to the bills. Though it turned out, even if I ignored my bills unfortunately the companies issuing them did not.

The upshot (or it should really be downshot, because there was nothing that felt ‘up’ about it) is that, by the time I was in my mid-twenties, my credit score was in the toilet. So far in the toilet you’d have to peer though the U-bend to get close to it. It was basically so bad it shouldn’t have even been called a credit score. A credit snore, perhaps.

What got me to that point? The ostrich tendencies through an early adulthood defined by high rent and a hesitance to understand the basic principles of budgeting led to defaulted Council Tax, defaulted credit cards, abused store cards and outstanding utility bills. I owed lots of money to lots of people and, as said ostrich who also defines as a people-pleaser, for me that was unbearable.

A photo of me in the early 00’s, right before I stick my head in the sand so I don’t have to look at bills

So I ignored it.

Of course, it wasn’t long before my debts caught up with me as they always do. And so I decided that 2013 would not only be the year my husband left and I became responsible for our household finances, but also the year I’d start opening scary red-tinged envelopes.

There was no secret here to paying off all the money I and we collectively owed: after a nerve-wracking day spent ringing my creditors I realised there was around £8,000 I needed to clear my debts – and eventually, improve my credit score.

I got to it. Some settled accounts at slightly lower than I owed: by that point debt collection fees had sent final figures skyrocketing beyond even twice as much as the original figure. Others allowed me to commit to years of repayment, with one agreeing to a 3-year term at £30/month. To coin a phrase, every little helped. And though I was going at a snail’s pace to emerge from that U-bend of bad credit, I felt like I was making progress.

“Improve My Credit Score”, She Said

In 6 years I’ve gone from being in a place of heavy debt and red letters to being an attractive candidate for credit, and to me that is so exciting. Bad credit used to be such an intrinsic part of my life – as a result credit checks still leave me sweaty-palmed and anxious – but now every time I receive an offer through the post of a credit card limit increase I am triumphant. “YES!” I want to fistpump, “I AM worthy of all that money at an insanely high APR!”

With the caveat that I am no financial advisor (but the knowledge I have spent hours of research on this), there are a few things I’ve done over the years that have undoubtedly helped me improve my credit score:

Know Precisely What’s Happening In Your Credit Report
As scary as it is to see your credit report is worse than Wurzel Gummidge’s (or 2016 Alice Judge-Talbot’s), forewarned is forearmed and it’s best to go into a period of credit repair knowing your exact situation.

And contrary to popular belief you don’t need to shell out any money.

My favourite credit report company CheckMyFile references multiple agencies – Equifax, TransUnion (what used to be CallCredit), Experian and Crediva – and displays your report from each in an easy-to-understand dashboard. It’s a really visual programme that’s allowed me to exactly pinpoint what’s going wrong and, crucially, how I can fix it to allow me to improve my credit score. It’s a top-level service that gives you a handy timeline where you can track how your credit score is doing as time goes on, which has been a huge motivator. 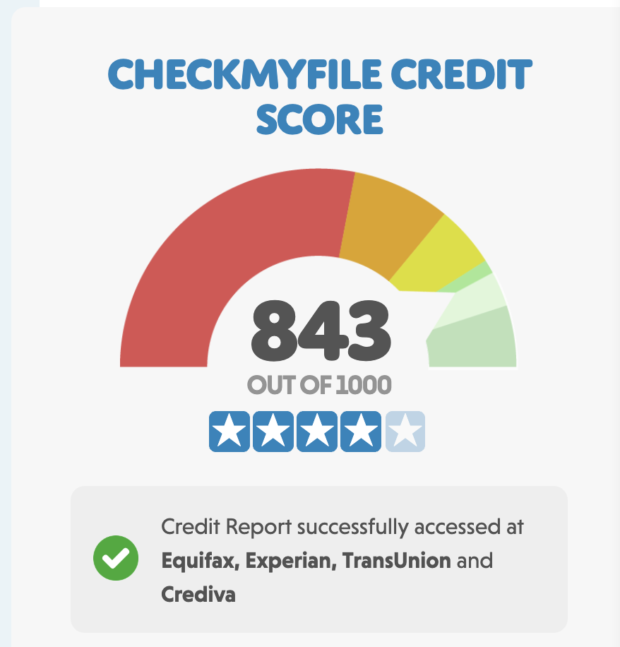 CheckMyFile is free for the first month and £14.99 monthly thereafter: I love them and wholeheartedly recommend them as a starting point when it comes to improving your score.

It’s important to study your credit report forensically on a monthly basis, making sure all the information on it is correct.

Switch To An 0% Interest Balance Transfer Card
As soon as my credit score was good enough I transferred my debt to a card with 0% balance transfer interest (there are fees attached to this but for me these were much less than my %APR): as soon as this 0% period had expired I transferred it to another, and so on.

Have EVERYTHING On Direct Debit
The only time I’ve ever defaulted on a payment in the last six years was with La Redoute: I’d bought an expensive rug (it was £550) on my credit account with them as we had recently moved house and I wanted a little bit of leeway after a month of moving expenses.

Only I didn’t realise that La Redoute don’t offer Direct Debits for their account payments.

This bastard late payment in August 2017 is now the only blip on what is otherwise a flawless report.

Have the minimum amount direct payments set up wherever possible; pay extra on top of this if you can, but this way you’ll never miss a payment (or receive a default). And, if your creditor doesn’t offer a Direct Debit option, set yourself a bloody reminder.

Get On The Electoral Roll
Easy – one of the quickest things I did to improve my credit score was get on the electoral roll. Though you are already, otherwise how would you be able to vote, right?! ;)

Keep Your Debt As Low As Possible
It’s good to have a low amount of debt, as lenders like to know you don’t have high levels outstanding. It’s best to prioritise getting your debt down to less than 50% of the credit available to you.

Consider a Credit-Building Card
These have sky-high APRs so you most definitely want to spend within your means and pay the full balance monthly: credit-building cards are designed for those with little or poor credit history and my own Aqua card with its initial £200 limit was instrumental in helping my score climb in the early days.

Now I’ve done all the hard work to improve my credit score, all I have to do is not spend on all my newfound credit. Repeat after me: credit cards are not free money…