I’ve had one of those colds. You’ll know – the ones that go on and on and on and on (and on and on and on). It started a fortnight ago, knocking both Hux and I down. Then I thought it got better that weekend but it didn’t (which is definitely the reason why I couldn’t handle my cocktails…) and I was eventually completely and utterly KO’d, unable to do anything but whine by the next Friday. I even missed a very very important work night out because I just couldn’t face a night of Prosecco.

The work stress has been cranked up to ten this week which is probably a big part of the reason why I just can’t shift this effing lurgy and, in all honesty, I am really not good at being ill. I feel tired, useless, slow and all-round miserable which manifests itself in a self-perpetuating cycle of self-pity. I HAD A FLU JAB, THIS IS NOT SUPPOSED TO HAPPEN.

In my desperation I’ve been reading blogs in an effort to feel better (seems legit) and lo! One of my favourites had a piece all about my exact problem: how to cure your cold, featuring advice from people on Twitter and Instagram. Only I read it and realised that literally none of this advice applied to me; there is literally no ‘get better from flu’ advice that helps when you are the sole carer of two tiny humans demanding attention, love and food from you. And how inconvenient this is.

Seriously though there’s no harder time when it comes to single parenting than being ill and having to be a responsible adult. It’s tough and the support system you take for granted when in a relationship just isn’t there; I can’t exactly ask my ex-husband to cancel all his weekend plans and drive 60 miles to come and give me a hand. Wouldn’t be very strong independent woman of me now, would it?

And so we cope. This is how. 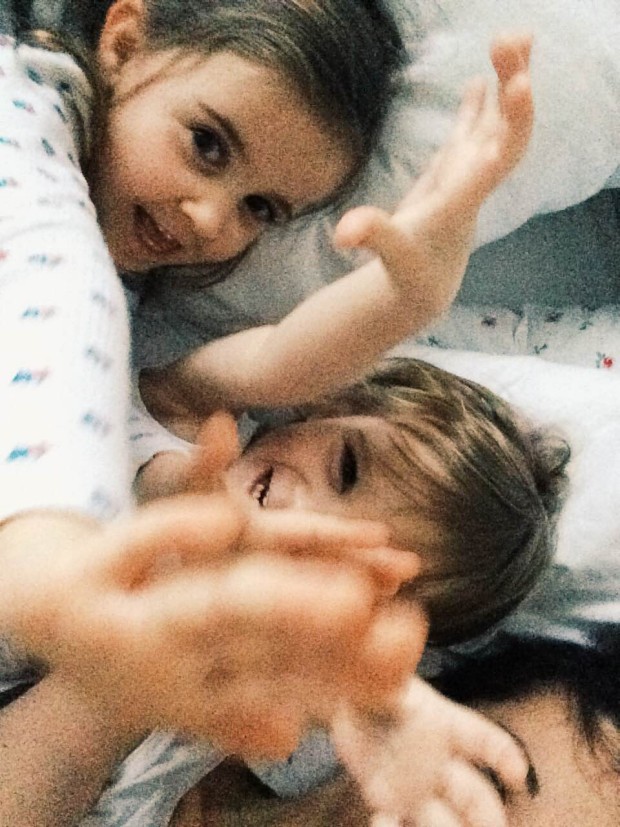 Get as much sleep as you can
Ahahahahahah. Are you joking? You can bet your bottom dollar the one time you’re ill is going to be the one time your kids get up at a truly ungodly hour. Yay… In absence of sleep I choose caffeine or guarana. Healthy it is not, but I can sleep next year. Or in 2017. WHATEVER.

Eat lots of vitamin-filled foods
Saturday: Green juice, KFC lunch followed by curry and a beer because nothing else was working on the sore throat so why not?.

Sunday: American pancakes with bacon followed by more curry and enough chamomile tea to make me feel nauseous/virtuous (it’s about the same point).

A handful of satsumas cos Vitamin C.

So I won’t win any awards for this weekend’s food but at least I got us all out the house (drive thru!) and involved in some cooking. Plus there was so much goodness in Saturday’s green juice I basically don’t need to eat any vegetables for at least another couple of weeks. Bosh.

I force fed the children grapes so they don’t get scabies.

Instead I say: charge up all your devices. The last time I had a phone upgrade I cleverly kept my old iPhone (GENIUS move which was well worth the £100 or so I would’ve got for it), which now lives in my bedside drawer for such emergencies as Single Mum Flu. Once charged it entertains the littlest child whilst the iPad entertains the big one. Model parenting it ain’t but when your head is pounding more than a bad hangover and you just need 30 minutes to lie down in silence it does the job. Thank-you Apple (and CBeebies. And Netflix. And Frozen).

When they’re bored of the devices I like to get the messiest, busiest toys out and let them go wild for a special treat – this weekend it was the Playdoh and I let them mix the colours together. To be honest it was past its best anyway but they literally had three hours of blissful fun playing with it.

For my entertainment and so I wouldn’t lose the will to live I washed my sheets and cooked a really easy curry (when you have two little people it’s impossible to spend much time resting on the sofa anyway). Took my mind off feeling like death and meant we all had something to eat that day – bonus.

Take a long relaxing bath
Or fill the bath for your children and quickly get in it before they realise. You’ll have five minutes tops, probably shouldn’t light candles and won’t have time for a DIY skin-boosting facial but hey, at least you’ll be clean.

And there you have it. Your recipe for health. I can guarantee you won’t feel much better, but at least you’ve tried, eh?