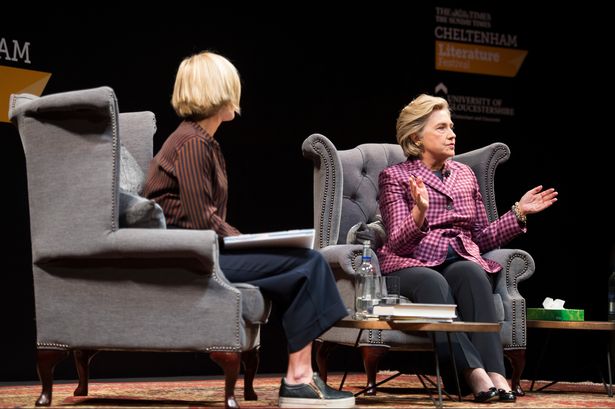 Me Too: My Sexual Harassment Stories

Yesterday I was in the same room as Hillary Rodham Clinton.

I was one of 2,000 who’d managed to snag tickets to see her speak at Cheltenham Literature festival – tickets that sold out in a swift 43 minutes – and I’d spent the two weeks prior hopping up and down with excitement.

I was not alone in my exhilaration: as we waited for HRC to appear in conversation with the brilliant journalist and broadcaster Mariella Frostrup the anticipation in the room was palpable.

I was surprised to see just as many men and women at the event, where there was a wonderful feeling of jollity and camaraderie. I spotted one of my favourite sweatshirts of all time, Otherwild’s ‘The Future is Female‘ proudly being sported by a guy, alongside a couple of ‘we heart you Hillary’ signs worthy of a pop concert.

In due course there were Secret Service rumblings as men in black suits scurried around the venue to secure the exits. Hillary had arrived, and from my spot near the side of the stage I could see her behind the curtain greeting Mariella as the Vice Chancellor of the University of Gloucestershire made his introductions. I was happy to see it wasn’t just me leaning over the railings to get a glimpse of an idol: the couple next to me and teenage girl down the row were as deeply uncool.

She strolled on stage reflecting none of the antsy anticipation of the audience, rewarding our wait by giving us ‘that’ wave and gracefully taking a seat.

We watched for 90 minutes as she spoke on all things feminism, election, Trump, Russia and politics. And what a 90 minutes it was. 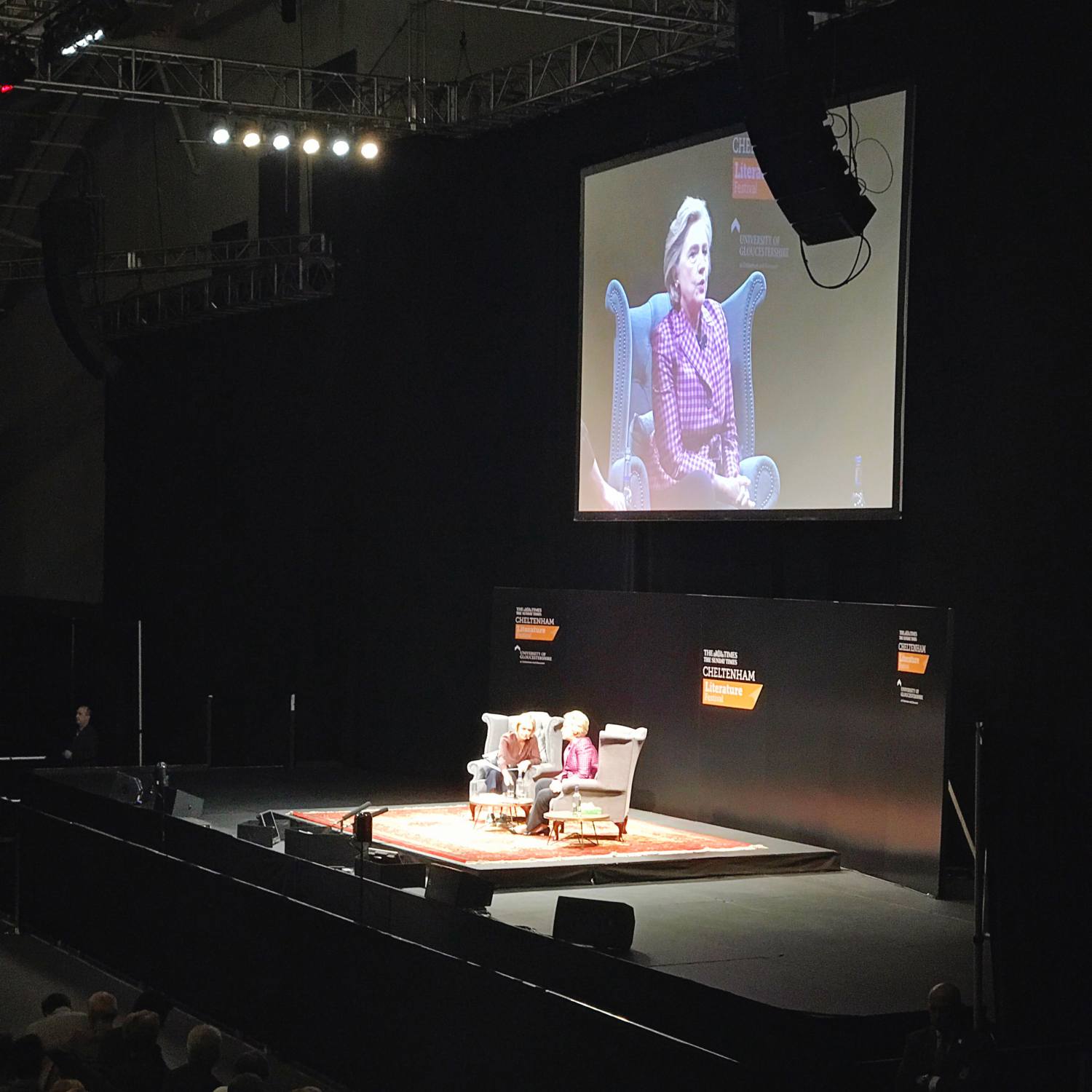 If you’ve seen one of the myriad interviews Hillary Clinton has undertaken since the release of her book, What Happened, you’ll know what she’s all about: she didn’t say anything wildly different to the party lines and soundbites I’d heard on Andrew Marr, during podcasts and in the book itself.

But having the honour to listen to her speak on subjects so important to her in person was so much more than the sum of these media-friendly quotes.

I’ve never known a world where a Clinton was not a figurehead, whether in American politics or the general public eye. That being said I missed her primary Presidential Campaign back in 2008 because I was more concerned with pints of beer than world politics, and I missed the boat on her feminist agenda until 2013 when I got divorced and became one myself.

Then the 2016 race began and I found myself awed and fascinated with the first female Presidential candidate the United States had ever seen. I knew she could beat her ‘reality TV’ contestant to the finish line and I knew I’d enjoy what this would mean for women the world-round as much as the next feminist.

In Brexit Britain I never imagined a situation where the most important country in the world could so poorly misjudge the outcome of their Presidential race. I might not be American but I mourned along with the rest of the world the result: I wept as I watched what has to be the most dignified and passionate concession speech of all time.

“To the young people, I hope you will hear this. I have spent my entire adult life fighting for what I believe in. I have had successes and I have had setbacks. Sometimes really painful ones. Many of you are at the beginning of your professional public and political careers. You will have successes and setbacks, too. This loss hurts but please never stop believing that fighting for what’s right is worth it”

The fervent enthusiasm women hold for Clinton is almost sad. It speaks volumes of how few women there are in power that we cling to our handful of role models, she being one of the finest. For all her faults, Hillary has spent a lifetime fighting for that which she believes in – fights that are relevant to so many of us – and that passion was clear to see on stage yesterday.

I was so awed at Hillary’s presence, grace and charm, the effortless style in which she answered even the toughest of questions. Her calming presence overwhelmed me, her accomplishments and passion so clear and overwhelming that I found tears rolling down my cheeks on more than one occasion.

Even the on-the-fence couple next to me (“We’re not sure if we like her yet”) left the auditorium full of superlatives, praising the woman we’d spent the last 90 minutes listening to. If we didn’t know it before, by 3 o’clock on Sunday afternoon there could be no doubt in any of those 2,000 people’s mind that the Presidency was stolen from her.

On that afternoon I felt like I learned so much from Hillary Clinton.

To never let the bastards get you down, even if they’re tangerine-tinged billionaires who spend an infinite amount of money to make you fail.

To not worry about the small things, because you’ll get pulled up on something inconsequential – like your hair cut – any way.

To prioritise your family and friends above anything else; though you might not count former Presidents and Fashion Designers in your inner circle, they’re the best support you have.

To never give up the fight for what you believe in.

Hillary left the stage to a standing ovation, the likes of which I’ve only ever seen at huge concerts (or The Book of Mormon). And bloody deservedly so; she’s an icon, a model feminist, a leader, an advocate.

I can’t wait to see what she does next, and know whatever that is I’ll be following with admiration and inspiration.