Things People Think It Is OK To Say 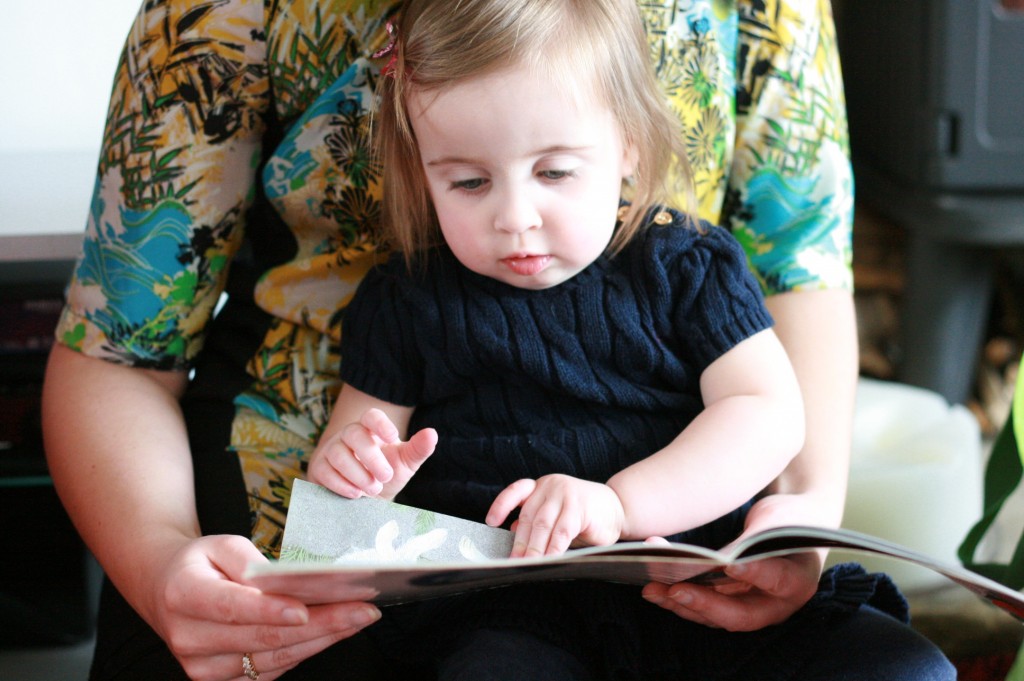 Thank-you to everyone who read, commented and contacted me after my last post. I found it touching, inspiring, interesting and heart-wrenching to read so many different women’s points of view and experiences of infertility, pregnancy and motherhood, a definite eye-opener for me and I hope for you, too.

I admit it felt a bit unnatural to write about our life with Elfie from the perspective of her health needing special consideration; since day one I’ve had the mindset that despite her issues our family is no different to any other, I’ve never wanted her to be singled out because of her who she is. I’ve never felt we deserve praise or pity for the way our life is, we just get on with it and know that we have it lucky in so many other ways. So to write about her in that way made me feel quite emotional (along with my mum, apparently, who called me in floods of tears when she’d read the post). 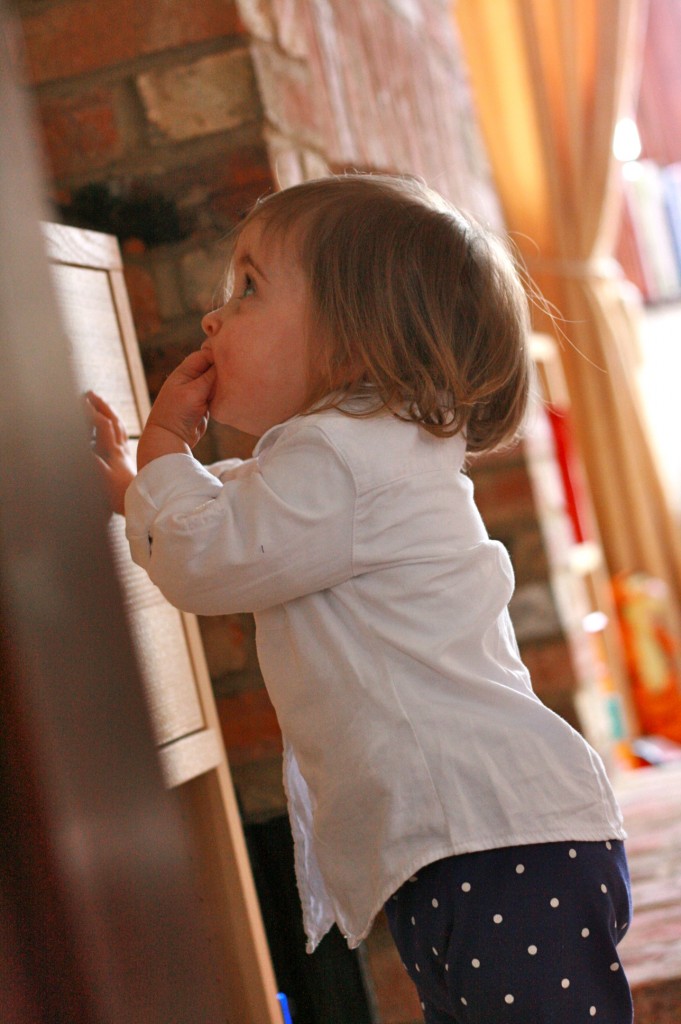 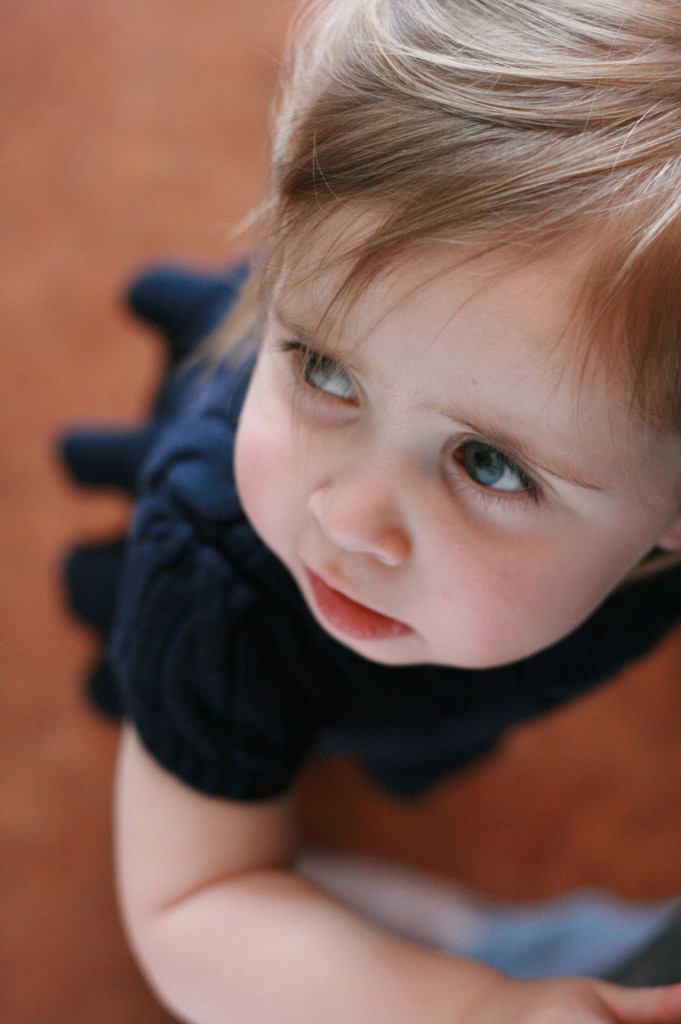 I thought now would be a great time to write down some points about our little cherub at 21 months before we become a family of four. She doesn’t seem to comprehend that a baby’s on the way, though if you ask her where the baby is she’ll lift my top up (not helpful in public) and point, before getting distracted by the hilarity of my belly button and then searching for her own. She also really likes to look at a picture in one of her books of a kangaroo that has a baby poking out of its pouch and then pointing at me. Clever girl, she does not know how much her world is about to be rocked. 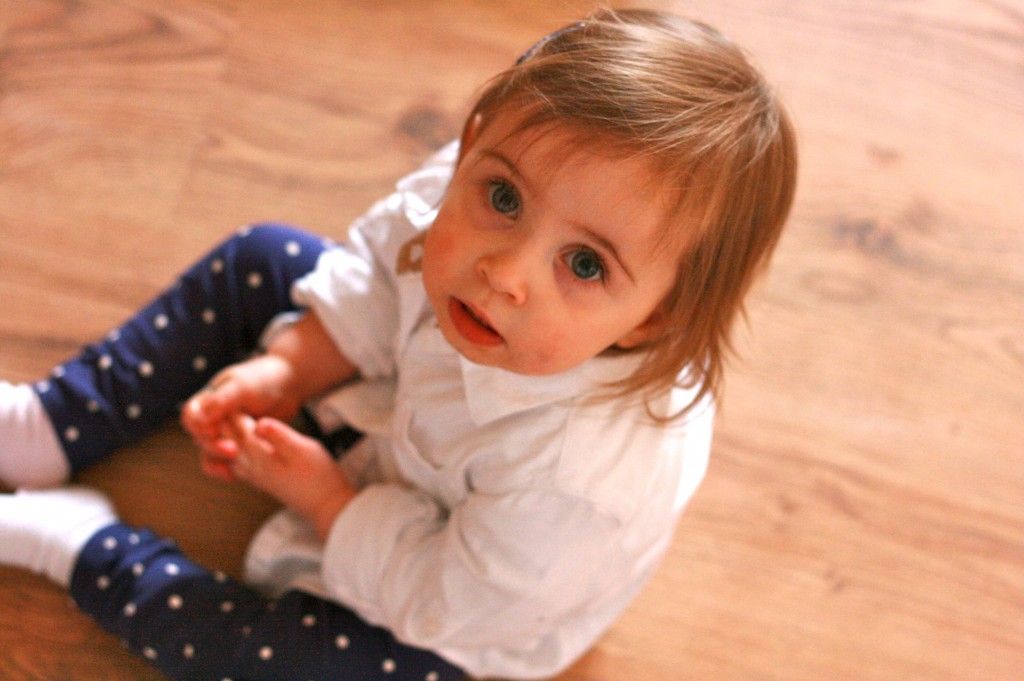 Elfie’s turning into a real little tomboy. Give her the chance and she’ll play with helicopters, airplanes, lorries and cars over dolls and other more typical ‘girl’ toys, something I’m really glad of as I’ve made an effort to be as gender-neutral with her as possible when it comes to playing. She LOVES pointing to airplanes in the sky and when she sees a lorry drive past the car she’ll point to it and say “OOOOOOOOOOH!!” She likes nothing more than spending time outside and will potter for hours poking at leaves, looking at the wall and examining our new fence. Whenever we’re inside she will ask to go out and when we come into the house she will wail and cry. Because of her love of being in the fresh air she by default loves putting her shoes on (shoes = OUTSIDE) but if she discovers we’re going out in the car and not for a walk there will be trouble (see the photo below: her tantrum face is not pretty). She’s also a massive fan of water and anything wet which has been fabulous for the warm weather we’ve been enjoying. We have great plans for the fun we’ll have in our garden this summer and in the meantime she’s always delighted to be allowed in the shower with Will or I. 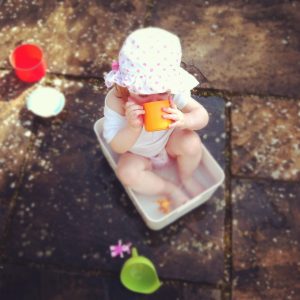 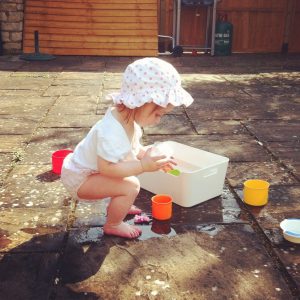 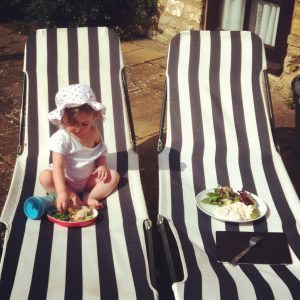 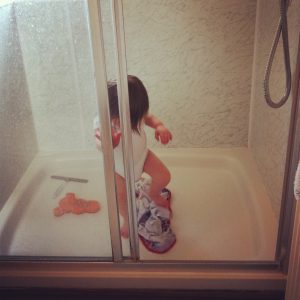 Elfie loves: Baby Jake and Balamory on CBeebies, her Daddy, books, loud noises, peas, fish, yoghurts, TIGGER (Tigger is king), iPads or iPhones, bananas, drinking from a real cup rather than a beaker and being chased. Her list of dislikes is long and bizarre and includes any kind of hoover (handheld or upright), red foods, any drink that isn’t water or milk, bees and other flying insects and most recently, her baby monitor. If she doesn’t like or want something she has a habit of vehemently waving her hand at it, as if she’s saying goodbye to it and will not stand to be breathing the same air as the offending item. 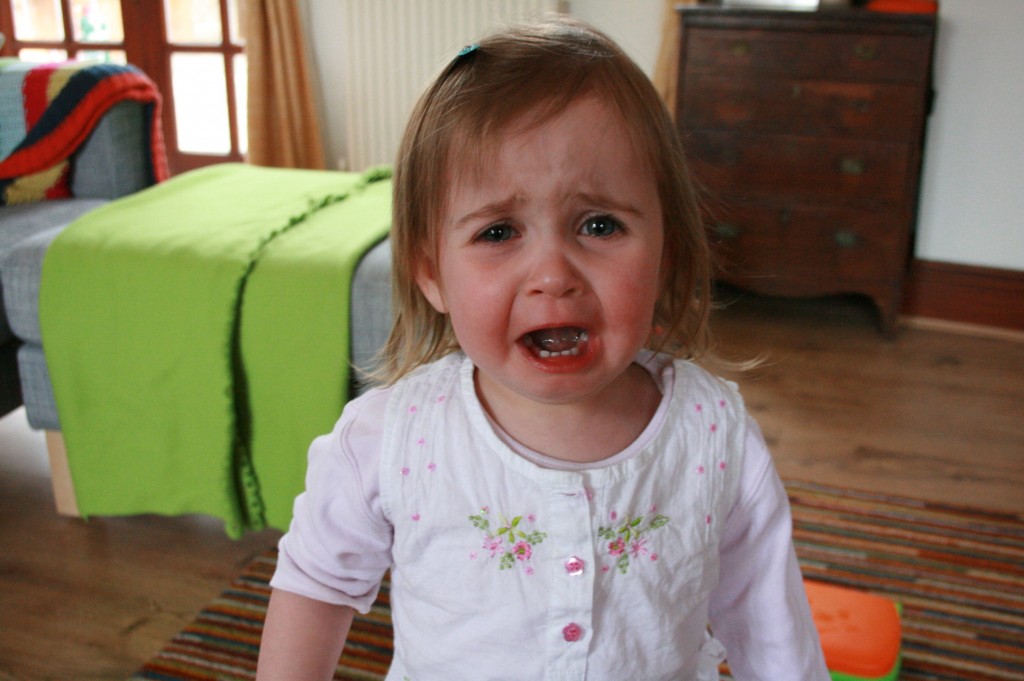 The day we moved house Elfie started walking properly, and she has not stopped since. She loves a good toddle to the shops (hates actually going in the shops mind you) but quite often decides that she gets tired before we have to go home and would like to be carried. This has been fine up until now but ever since I started getting a little tired myself it’s becoming harder and harder to tote her around on my hip. Sidenote: how bloody expensive are kids shoes once they can walk??! 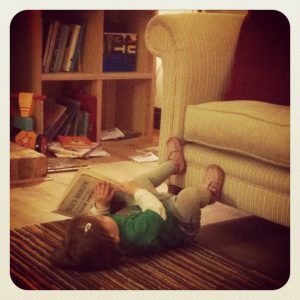 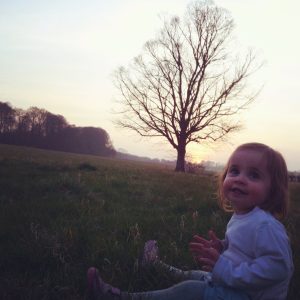 Her vocabulary is expanding every day and she understands almost everything you say to her (and even if she doesn’t understand she will act like she does) with her favourite words to say being Dada, nana (banana), please, yes, no and shoes. She CAN say Mummy but doesn’t like to do it too often and instead likes to communicate via a series of ‘uhhs’ and ‘aahs’. I’m not too concerned with her lack of vocab as I figure she’s got three months leeway from when she was so ill as a baby and I’m convinced it’ll all suddenly slot into place as the walking did. 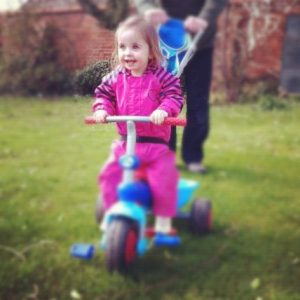 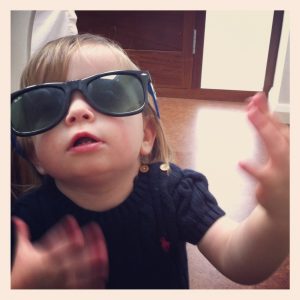 I think my favourite times with Elfie at the moment are the mornings. Will gets her up and we all cuddle in bed together whilst she drinks her milk. As soon as she’s finished she leaps up for the serious toddler business of What Can I Get Out Of The Kitchen Cupboards Today?; I love to see what she comes up with and brings to us in bed. Today’s loot involved 20 chamomile tea bags and a plastic cup, yesterday it was dried noodles and a biscuits. We then try and convince her to find a book to read (usually ‘Dear Zoo’) for some more snuggling but why snuggle when you can toddle? If Will’s feeling charitable he’ll do breakfast (Weetabix is her favourite) so I can snooze a bit longer.

Her health has been fantastic this month, which I think is a mixture of us learning further how to react when it deeps slightly under par and  being able to do this sooner and plain luck. Long may it continue. 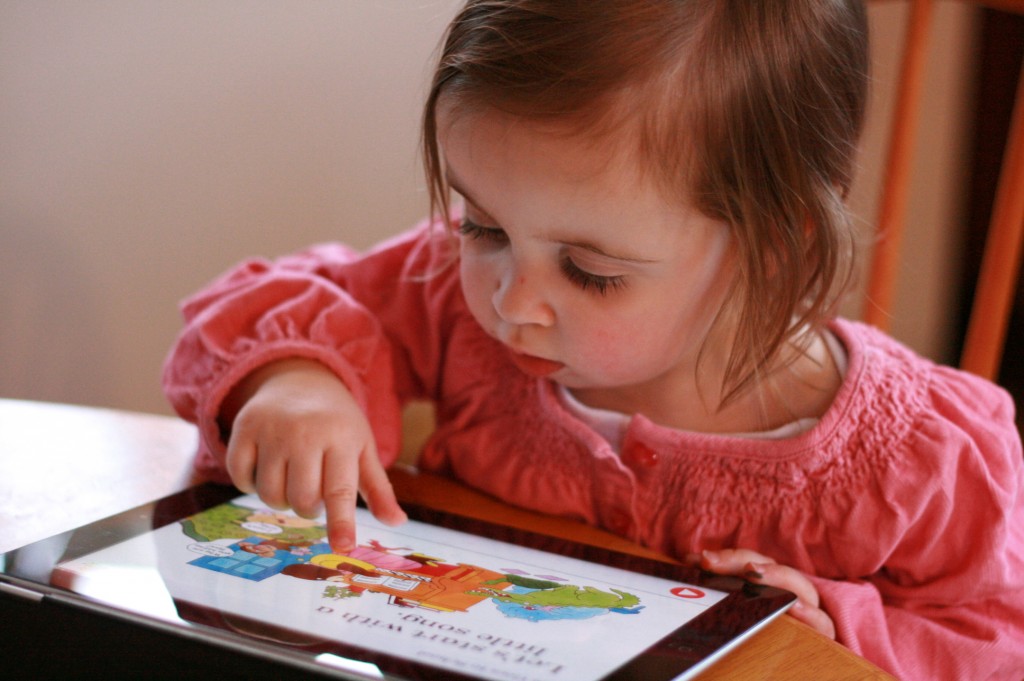 Elfreda, you are the funniest, happiest, most beautiful and delightful little girl. I hope you like your little brother!