I found out something shocking about one of my friends this weekend.

We were out to dinner with our respective partners as a foursome, when conversation turned to a controversial tweet I’d been thinking (and talking) about since:

We were just chatting in work and apparently it’s weird that Amy and I don’t sleep on the same side of the bed every night. Some nights I like to sleep by the window, some nights the door. It’s not really that unusual, is it?

At current count the tweet has had 2.5k responses, mostly of the “what are you doing, you deviant?” variety. With which I kind of agree: I’m the sort of person whose day is thrown out if I can’t use my usual locker/shower cubicle/loo at the gym, I like to read the same books over and over again and holiday in the same places. I enjoy familiarity and routine, and if I didn’t know which side of the bed I was sleeping on of a night I think I’d feel quite discombobulated.

But over a lovely dinner in the pub last Friday I found out my friend Laurie who founded the stationary company Comme Glom and her partner Jim, this is what they do. They are so laid back and cool that they care not who sleeps where, switching between sides of the bed as they wish.

My uptightness may not be able to cope with this, but it’s that creativity and colour that Laurie brings to the amazing stationary that is produced by her business. And I am so down with said creativity and colour: I’ve been using Comme Glom notepads for the last few months and they make such a difference to my working day.

If you’ve ever felt bored by an endless beige Moleskine notebook, read on to find out why Comme Glom should be your new favourite stationary brand since Kiki.K… 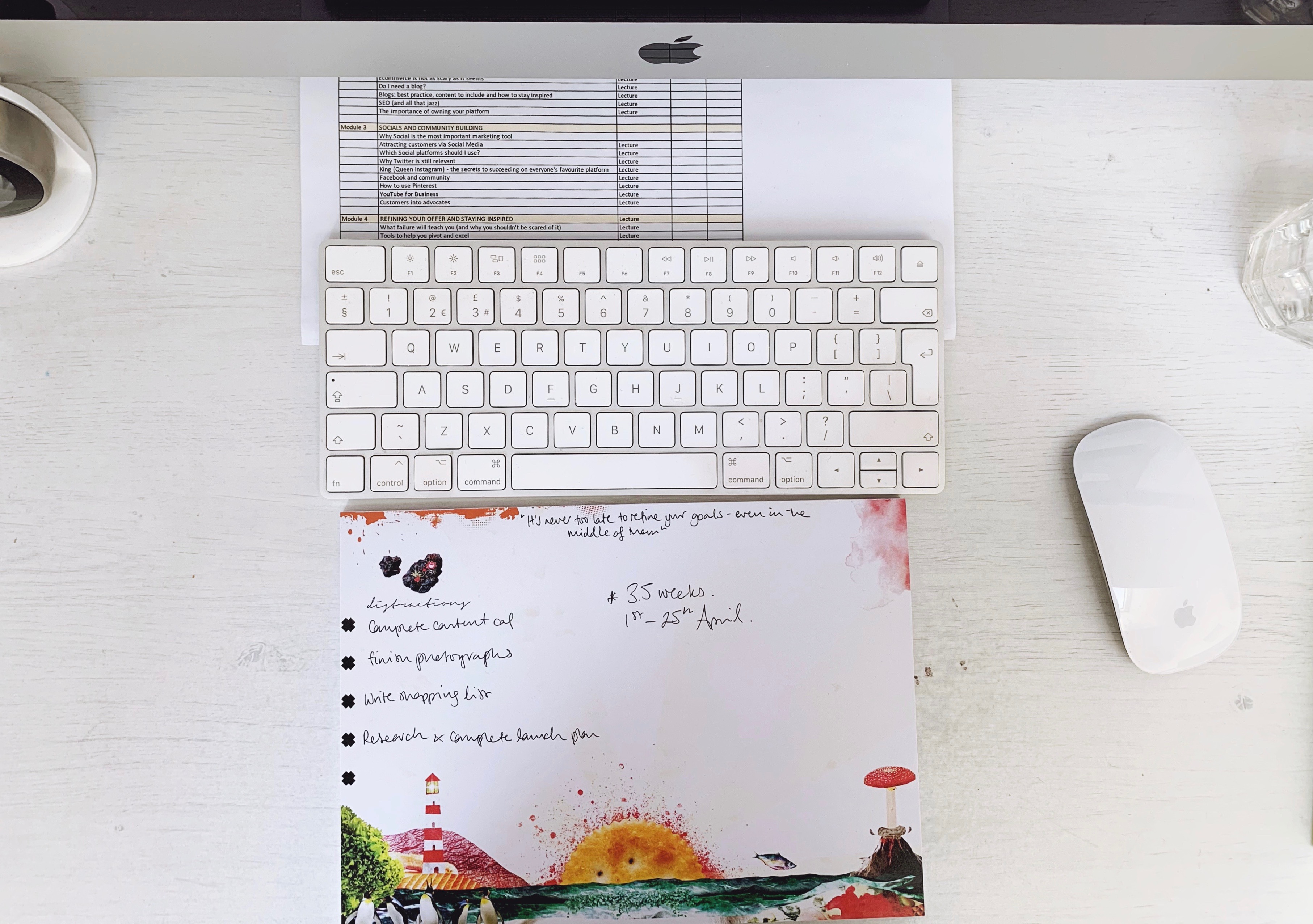 Hi Laurie, what’s your name and where do you come from?
So I’m Laurie, and I’m the Founder of Comme Glom. I’m mid 30’s ( wow that sounds old) and live between Worcester and Milton Keynes. Before I set up Comme Glom, I worked in advertising for over 10 years, on badass clients like Audi, BA, Vodafone and KFC ( yes I got a chicken cheque book which gave me FREEEEE unlimited chicken – this proved particularly dangerous when pissed on a Saturday night in town). More recently I ended up at BuzzFeed doing hard hitting work like – “what does his favourite taste in Cheese say about the kind of lover he will be”. Spoiler – if its Brie be afraid.

For the past year I’ve spent my time launching a stationery brand with a difference, Comme Glom: pronounced like ‘condom’ but actually stands for conglomeration. More on that later.

“Sure there are things like Evernote and you can write on your iPad screen and it saves in some cloud somewhere. But so many of us still love writing on paper.”

Where did you get the idea for Comme Glom?
I guess like all good ideas it started in a meeting, daydreaming. Laptops were banned for being too distracting, so we all totally relied on our trusty notebooks to remember what on earth we had talked about. In a sea of samey lined paper and patterned naff slogan front covers, I craved for something more. Something that was reflective of my style and had some talkability. Something that helped me remember what I had written and where.

So I started taking my plain lined notebooks and designing different things on every page inside – illustrating, ripping up magazines, drawing patterns etc. I felt motivated, proud and a little naughty using something that was so unique, when everyone else just had lined paper. But mainly I felt relieved. It helped me remember what I had written and where, flicking straight to the page I’d created with a giant frog on, because I remembered the notes had been written on that page.

And that’s how Comme Glom was born. The name comes from a hodgepodge of things stuck together. Since then we’ve gone live with notebooks, jotters, organisers, candles, homewares and wall art. 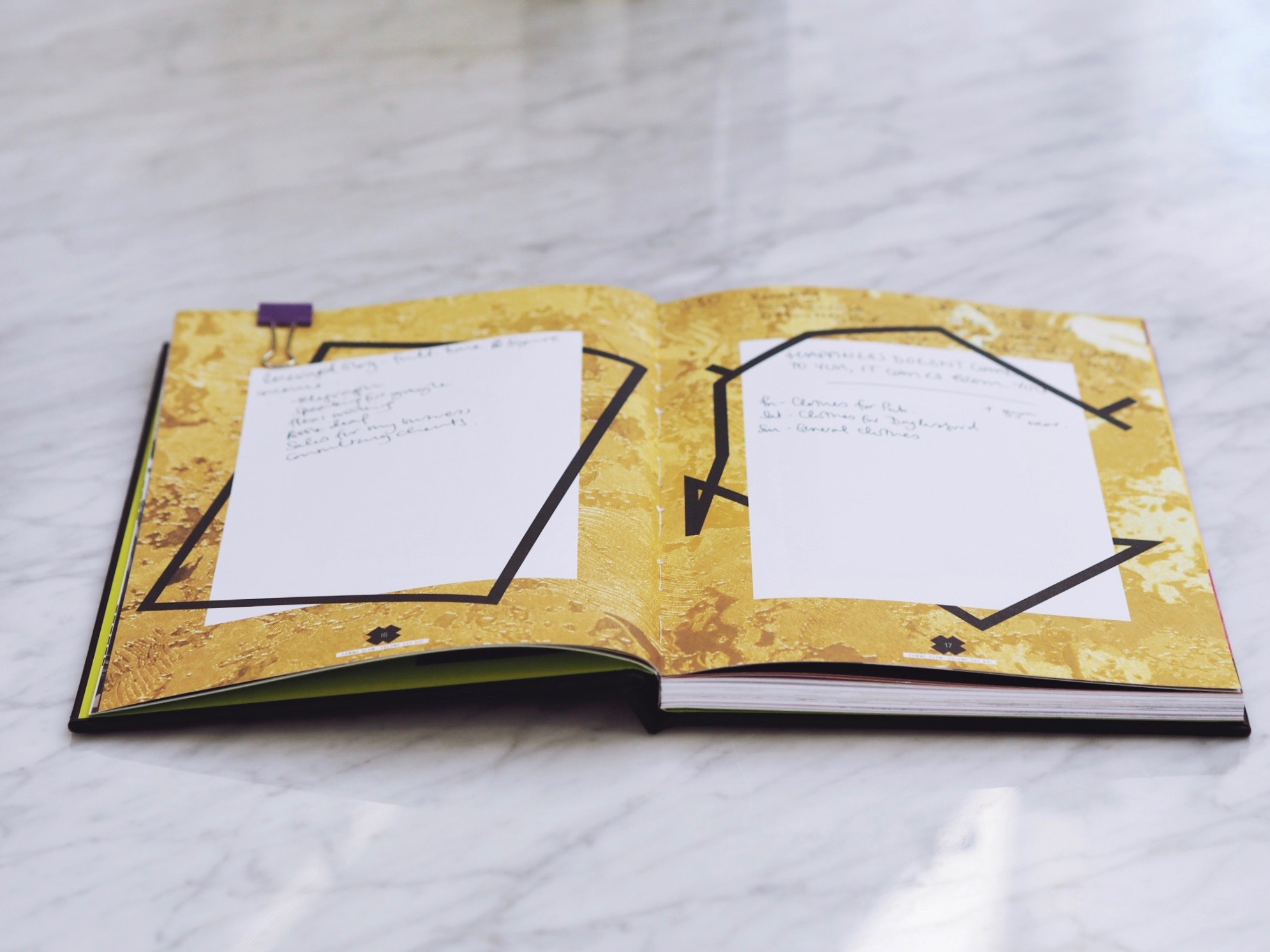 I love how, in such a digital world, you’ve created a product that is so beautifully analogue. In an Instagram-obsessed society do you think we’re experience something of a digital backlash at the moment?
Remember a few years ago when we thought sending cards was dead because you could send a little animated e-card to someone…? And then after a while we were like, this is cringe, not very thoughtful and doesn’t mean nearly as much to me as it does to receive something through the actual post on your birthday?

I feel that about paper and stationery.

Sure there are things like Evernote, and you can write on your iPad screen and it saves in some cloud somewhere. But so many of us still love writing on paper.

People actually gasp when they see our stationery: paper has such a reaction with people and I love that we’ve transformed something traditional into something that’s a little avant garde and helps with your productivity. Having a different design on every page just makes you smile and happy.

What has been the most challenging thing about starting your business?
I was not prepared for how lonely you could feel working by yourself and not having anyone on the desk next door to chat about the latest Kardashian escapade. (Never has a celeb story captivated me more with this whole Jordan/Khloe thing, since Solange hit Jay Z in the lift). My friends all still have jobs so their life hasn’t changed. I feel bad that I can’t spend £50 on a night out because I think – hmmm that could pay for some printing. It’s quite an isolating time. I look back at the times I used to get a regular monthly wage and think – wow that was swell. Popping into Zara and picking up whatever I liked.

I love that people who don’t have their own business say- oh you must get to work when you like, when the reality is I feel like I should work 24/7 and still wouldn’t achieve it all.

And what’s the best thing?
It’s the independence, and the happiness that you get when people see your idea in real life and love it. It makes me sound like a narcissist but people messaging us and saying that they are using their notebook to record memories for their new granddaughter, or that they purely believe our schedule made them pass their exams is really cool.

Seeing it in shops too is pretty cool. I remember hearing musicians say they realised they were big when they heard their song on the background in the cafe in Eastenders, so perhaps I should aspire to see someone using it in The Old Vic. 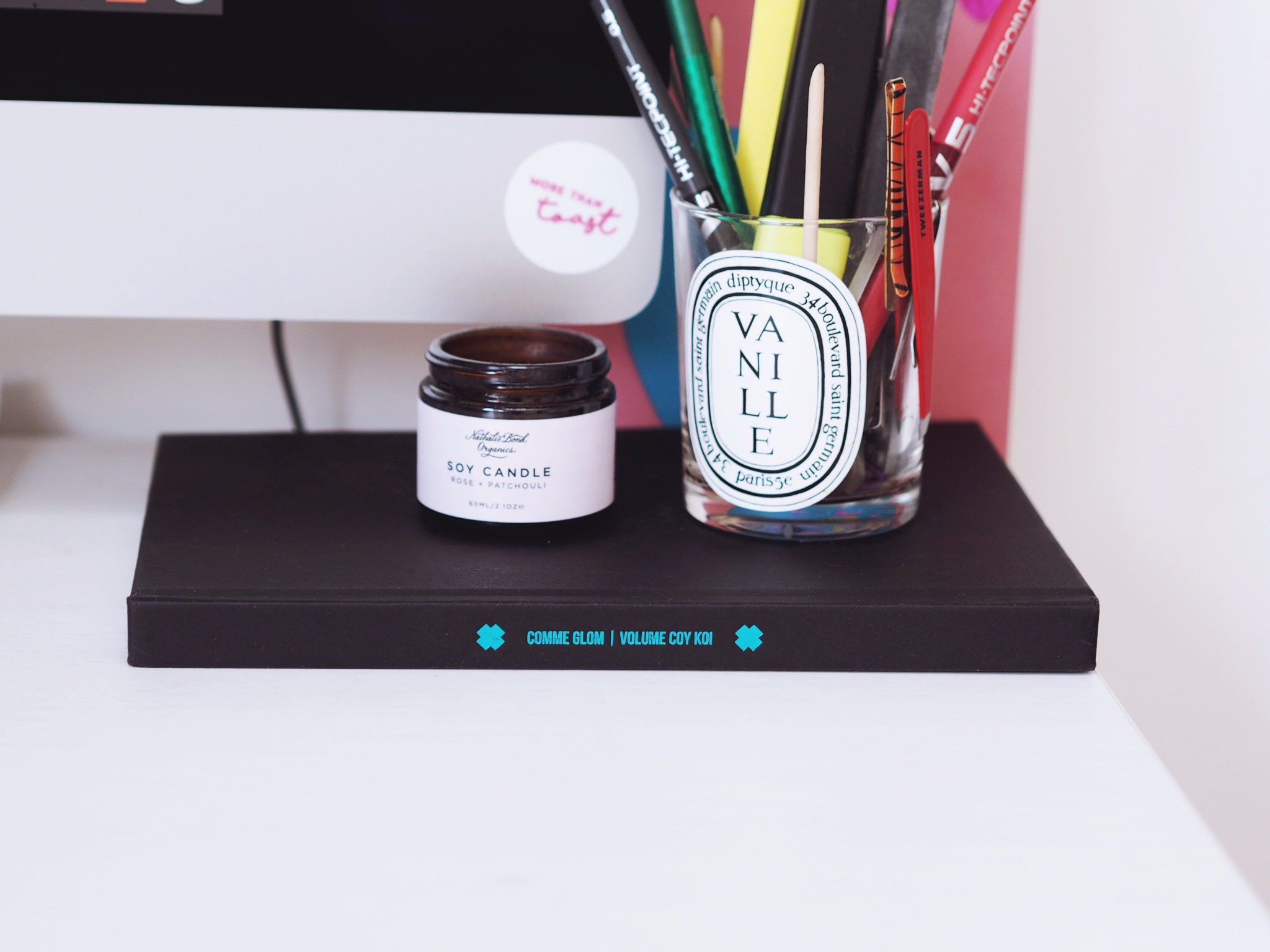 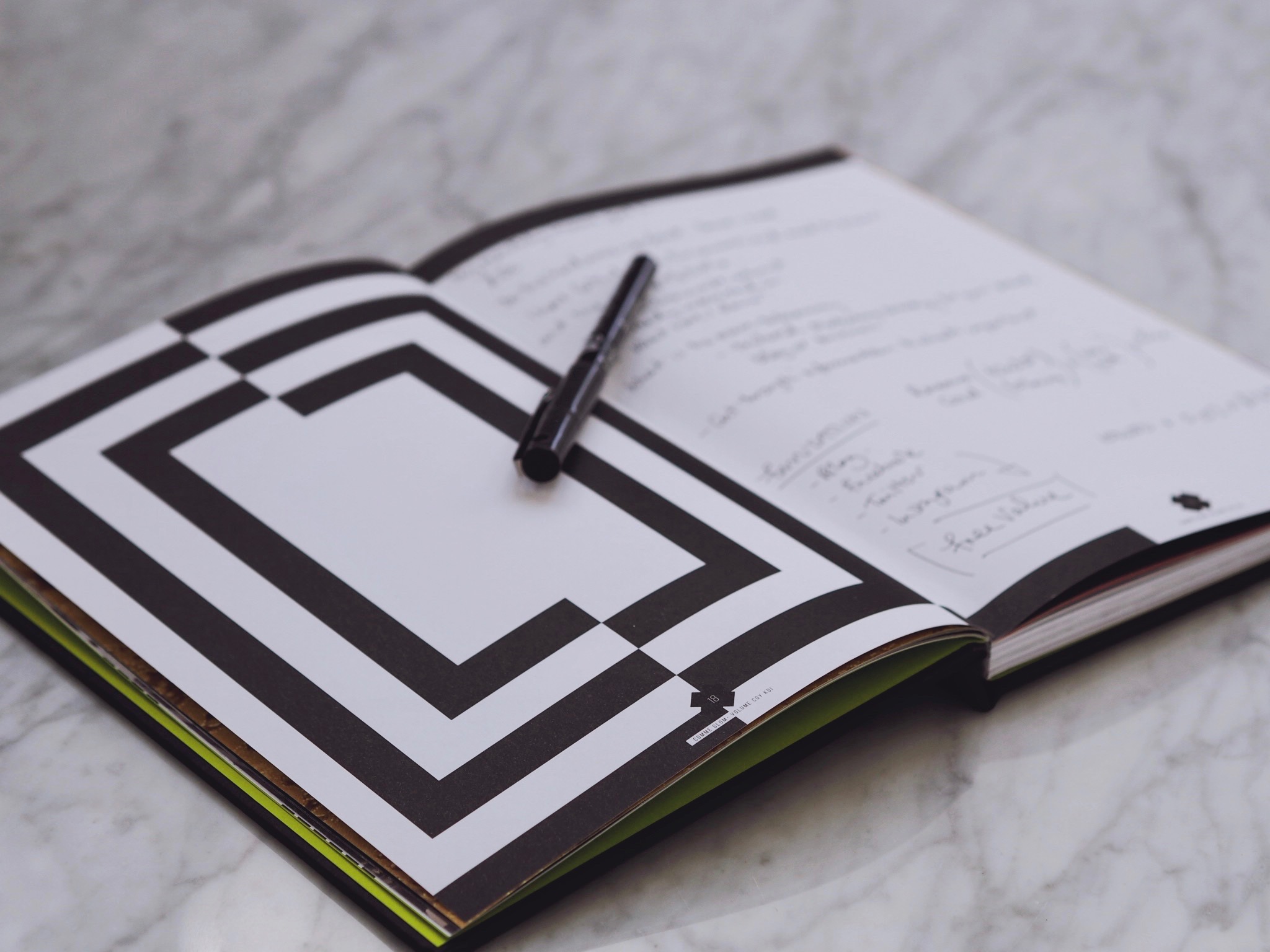 Like me, you come from a corporate advertising background which can be quite creatively restricting. How has it felt to run your own business where you’re free to do what you like, when you like?
It’s funny isn’t it? People who aren’t in advertising think that it must be the most creative thing ever. Sliding into meetings, playing in ball pits, and cuddling puppies to spark ideas. The reality is you sit, slog at your desk for hours and eat a lot of takeaways because you’re working late, because a client hated the first round of ideas you presented.

I’ve been freaked with my own business that there aren’t any templates or things you have to do to get something signed off. The sign-off is literally me. But then I realised that this is THE best thing. I’ve relished thinking about what do I want this company to look like, and how are we going to get there. I’ve done creative things when I felt like it, rather than because it was forced upon me. I’ve decided I just can’t work in jeans ever again. I’ve just listened to my gut and surrounded myself with positive people who think we are onto something special.

I’ve also realised the whole idea of having to go into an office is so outdated and bizarre. We’ve had a few short term contractors work for us since we’ve started – and I was clear – you work when you like, and where you like. As long as the work is getting done, why does it have to be done in an office, with a 2 hour stressful work commute. No thanks.

What’s next for Comme Glom?
We’re working with a number of independents and stores across the country, so I see that expanding- as we’ve had repeat orders from all of them so far. I’d like to get moving on new products. Candles are launching soon, as is homewares (cool cushions for your chair). We are also working with clients creating bespoke stationery for their brands, so expect to see some gorgeously unique beside the phone pads you’re going to want to nick and take home in a hotel near you soon.

As for me, I’d like to feel like a business woman soon, not someone who’s just winging it without a clue what they’re doing. But perhaps we’re all doing this?

Yep, I can confirm we’re definitely all doing this!

Thank-you so much to Laurie for speaking to me (and for a brilliant night at the pub last Friday). You can shop all of Comme Glom’s beautiful wares here – next on my wishlist is the amazing NSFW book!

Three Things You Should Be Buying from Small Businesses on Etsy

Creating A Dreamy Office Space From A Bedroom Corner

How Many Years Have You Spent Resenting Your Self- Assessment Tax Return? My Answer is 4