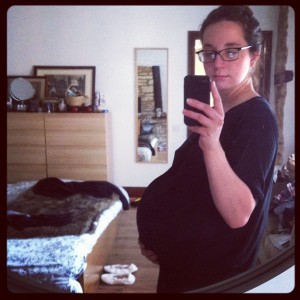 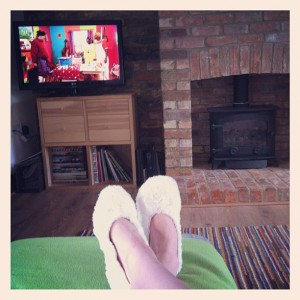 The very last pregnancy photo / trying to relax with Balamory

In my naive, blissed-out natural birth-planning state, labour was to go one way, and one way only. The labour niggles would begin, I’d take a paracetamol and get some sleep, take a bath, strap on my TENS machine if it all got a bit much and head into hospital. I’d be bout 6cm dilated and use gas and air before asking for an epidural and get told it was too late. I would push baby out drug-free and rejoice at the power of my body, feeling enthralled by my birthing prowess.

What I didn’t bank on was the three long nights of contractions that would stop as soon as dawn arrived and then start again at 4pm the next day. I didn’t think I’d keep getting to the TENS stage and want to then throw it out the window because of how annoying I found the vibrations and how they distracted me from breathing through the contractions. It might sound like a silly thing to say but I didn’t count on labour being so bloody painful. 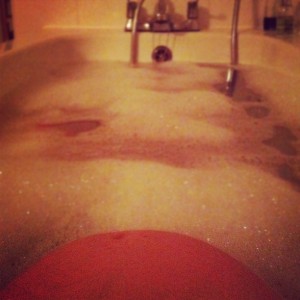 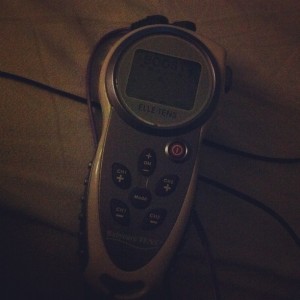 One of my many baths / the dreaded TENS

It all started on the evening of Will’s birthday party. The period pains had been on and off for a week or so but the real contractions started at around 8. I timed them for a while, took a couple of paracetamol and tried to sleep. It didn’t work, I was way too excited, so I took a bath instead and watched about 8 episodes of the office. Then it was TENS time, and this took my mind off the pain enough that I snoozed off at about 5am.

When I woke up the contractions had GONE. I was a bit disappointed but not too much, stuff was happening, we were on our way, it wouldn’t be long, right? WRONG. 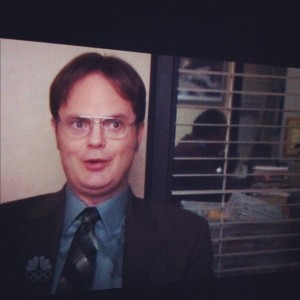 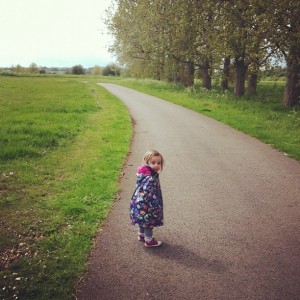 It was time to show the foetus the metaphorical womb door, so Will and I grabbed Elfie and went for a swift 3 mile march round the local country park. I even had a gentle bounce on the outdoor kids trampoline. Nothing. I needed to relax more so I took another bath and the contractions started again. YAY. We were in business. 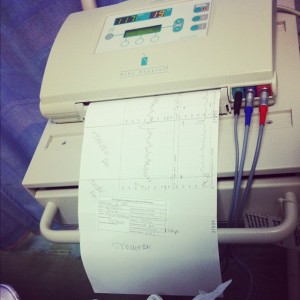 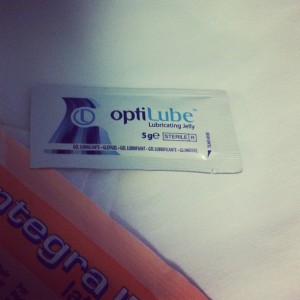 OR NOT. This process was repeated for another 24 hours and I was losing the will to live. I was so frustrated and distracted with it all that I won Worst Wife Of The Year award, completely forgetting to wish Will Happy Birthday on the morning of his 30th. The poor man. That afternoon at 39 weeks and 5 days pregnant I started to get a bit concerned that baby hadn’t been moving as he should have been so we headed to hospital for some monitoring. 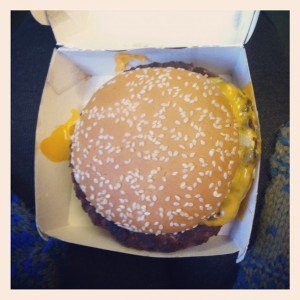 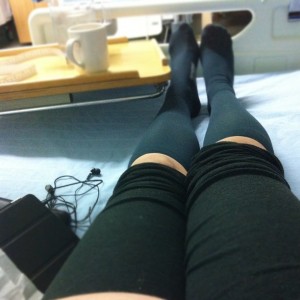 They were slightly concerned as baby’s heart rate was dipping slightly so asked if I could stay for them to monitor me for the evening. I’d asked the midwife to examine me to find out if I’d dilated at all but she said no as I wasn’t having contractions. Luckily 20 minutes later they re-started with a force so she agreed to see how far gone I was. I requested a decent rummage whilst she was down there, see if she couldn’t get things going a bit more. I was 2cm. Which though not very far gone made me pleased I wasn’t in pain for nothing and as requested she did a bit of a sweep.

They took me up to a ward for overnight monitoring and I was greeted by a woman in labour on all fours, sucking on gas and air as if her life depended on it and screaming blue murder. It was animalistic. They handily put me in the bay opposite her (erm, thanks) but once the midwife saw the look on my face at her screams I was moved to next to the window. I wanted to cry as I realised what was round the corner, although I found out the next day that she was only 3cm dilated at this point. 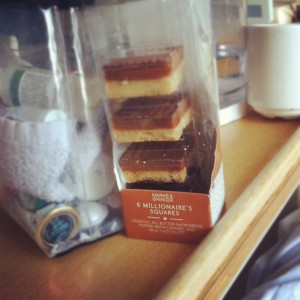 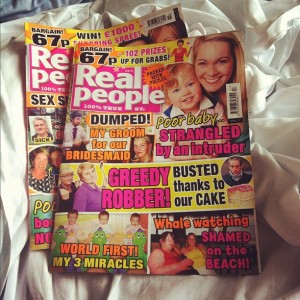 My contractions were becoming more intense and painful but I found I took a lot from my Hypnobirthing book and was able to deal well with them. I breathed through them and envisioned tightening rather than pain, and this really helped. I noticed that when I didn’t concentrate on the sensation of tightening they hurt a hell of a lot more. It was doable and the lady opposite commented how calm I seemed, apart from when a contraction hit which was apparently when I went a bit red.

The next day I was examined again and had reached 3cm, but the contractions had eased once more. After a couple of tearful conversations with Will and the consultant I decided to accept the Caesarian that was offered to me that afternoon. I wasn’t getting anywhere far with my contractions, drugs to speed things along were out of the question due to my previous section and I was exhausted. I felt crushingly disappointed that I wasn’t going to see the labour through to the end and I genuinely believe that if it had speeded along quicker then it would have been a different story, but I was so tired and was fast running out of mental strength. I’d been in pain for four days. The consultant gave me another rough stretch and sweep and the section was booked for six hours time, had that not worked. 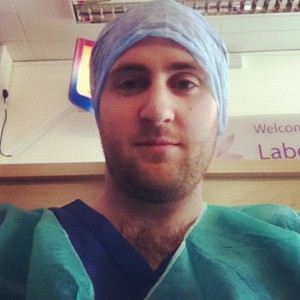 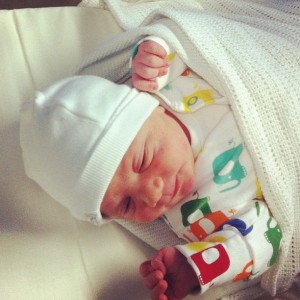 Will ready for the operating theatre / the first photos of Huxley

The feeling that I’d let myself down didn’t last long – I couldn’t believe we were going to have a baby that afternoon. When I’d gone in the previous day for monitoring that had been the last thing on my mind and I couldn’t wait. I was prepped for surgery by some lovely Doctors and Anaesthetists and Will was brought in for the birth moment; though not before he’d been taken into the wrong operating theater. “Erm… that’s not my wife”. Awkward. 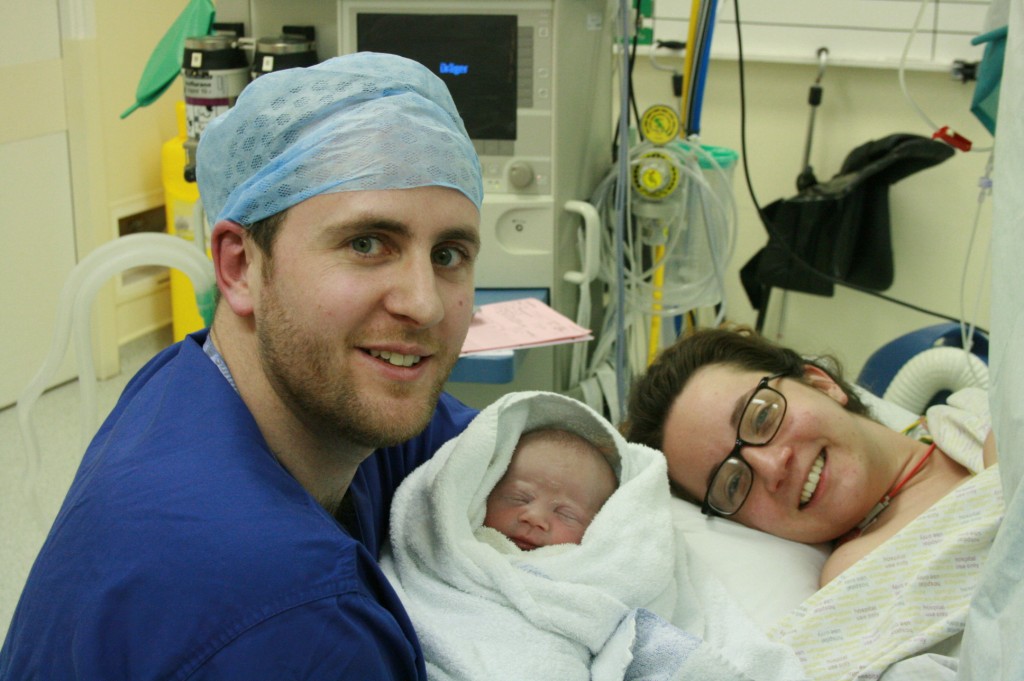 Huxley William Harold was born at 3.04pm on 16th May, weighing 7lbs 5oz. His APGAR scores were 10 straight away (winner!) and Will was able to cut his cord. I spent about 10 minutes with them before Will went with Hux up to the ward and I was sorted out. There were big issues getting my uterus to contract back as it should (I quote: “Mrs Harold, you have a flabby uterus”) and I was given some hefty drugs to help that made me feel horrendous. I got taken to recovery and immediately started begging to go back up to the ward. 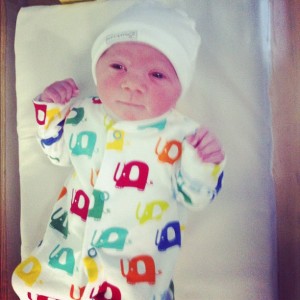 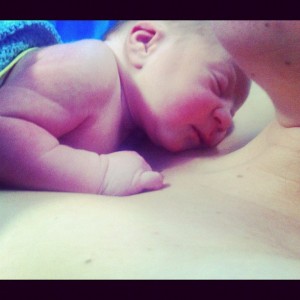 Meanwhile the paediatrician we’d been assigned was battling with Will to try and get Hux into Paediatric Intensive Care so he could have a cannula put in for immediate blood tests. We had not been told of this after-birth plan for him and Will very firmly told them there was no need for a line in or any sort of intervention at this stage. If Huxley was going to be affected by Elfie’s condition it was going to be a slow burner, not something that could be identified and treated immediately. Luckily Huxley was kept on the ward with Will and I was able to have skin-to-skin and feed him as soon as I was back from recovery. I’m so thankful that he was able to battle the Doctors on Hux’s behalf like that; can you imagine if I arrived and he’d been taken away needlessly? There would have been trouble. 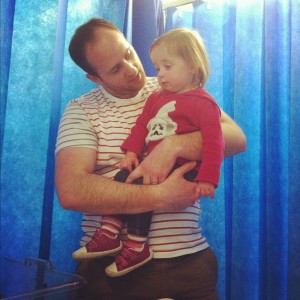 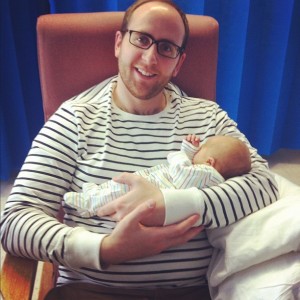 The Grandparents were summoned and Elfie was brought in on her own first to meet her baby brother, who had thoughtfully bought her presents of a Peppa Pig story book and a doll of her very own to look after (the doll’s name is now ‘Mama’). They didn’t stay long thanks to how awful I was feeling, leaving us to get our heads around the newest member of our family. 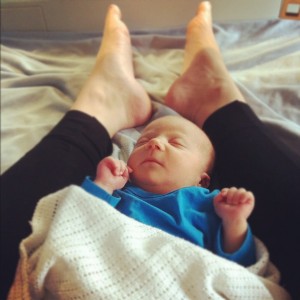 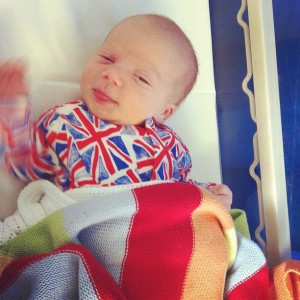 We were told the plan for Hux: blood sugar monitoring every three hours via a heel prick, sodium and potassium monitoring every 12 hours (a spike or drop in either of these or the blood sugar not remaining stable is the first flag for the condition) and then 5 days after birth he was to have a test to see the effect of stress on his adrenal gland. 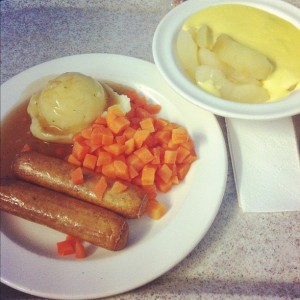 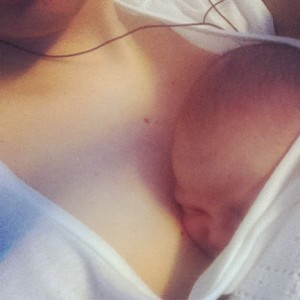 This food is not good for recovery / more skin-to-skin

The week passed in a haze of bad food, bonding, resting (as much as is possible on a ward with 5 other women and babies) and trying to establish the horror of breastfeeding. There was plenty of tweeting, a bit of weeping and a lot of nipple cream. My mum and dad brought me some delicious meals, Will delivered daily M&S picnics and the lovely Bryony brought a care package of gin and Pimms in a tin, chocolate and bath goodies. By the time the stress test came around I was almost out of my mind with the desire to go home to be with Elfie and Hux in my own house but we had to wait another day for the results. 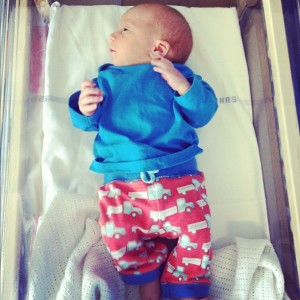 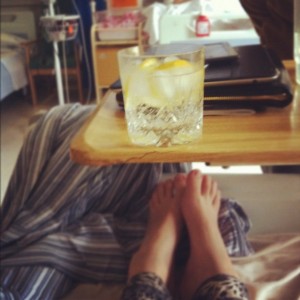 It was wonderful to find out he was in the clear – more weeping – but of course we had to hang around for another few hours as we waited to be discharged. 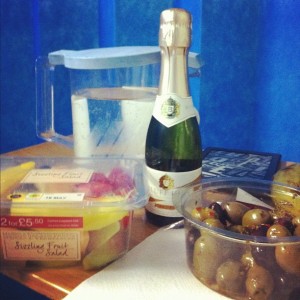 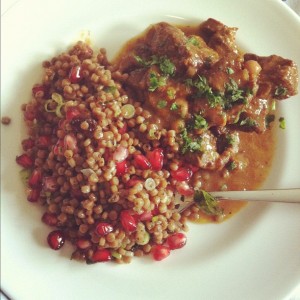 Walking through my front door was one of the nicest feelings ever and Will and my mother-in-law had been busy making the house lovely and clean for me, as was being able to step in my own shower that didn’t feel like it was crawling with MRSA. It was wonderful to have Elfie home to get to know her little brother and to begin our lives as a family of four. 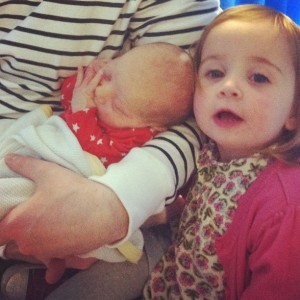 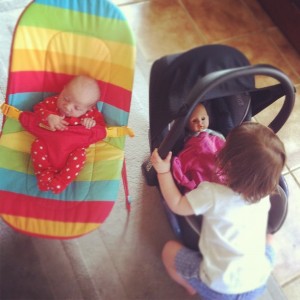 My KIDS / The two Harold babies, with baby doll ‘Mama’

So far she’s been a pretty good big sister- she likes pointing out his eyes and ears and saying ‘there there’ to him when he cries. She also seems to like getting into his car seat and swing chair and hugging him, though a little more violently than perhaps I’d like. Huxley is very tolerant of her, long may it last.

As for my feelings on the birth? I’m still feeling some disappointment at not being able to have a VBAC  and there will always be that element of What If… but I do feel like I tried to see it through to the end, though tiredness and pain got in the way. The fact that I’ve been so determined to get through the worst week of breastfeeding has helped allieve this guilt somewhat; Huxley has put on 2lbs in three weeks of being exclusively breastfed and I know I’m doing the best possible thing by him right now.

Is It Lazy To Have A C-Section?

Do You Know When Your Children Were Born?