Coming home from our holiday, I thought a lot about how easy I find travelling with my kids now. Granted, it’s a little because they’re growing up and managing themselves more, but I still believe it’s largely because we’ve learned how to seamlessly travel together as a family.

Looking back at the first holiday we took abroad together, I really didn’t enjoy it as much as I should have because I was just so worried about the logistics of holidaying with two children. It wasn’t easy but it wasn’t that hard either, and now with two summer holidays and a ski trip under our belts I think we’ve got the whole travelling thing almost down pat.

There was one main difference this year when we were travelling to and from Greece, and that was each child had their own Amazon Fire Kid’s Tablet. I can’t tell you how much stress I save with each child having their own mini source of entertainment, and as I’ve said before I’m SO not shy of roping in the help of a technological-based babysitter to make my life easier. 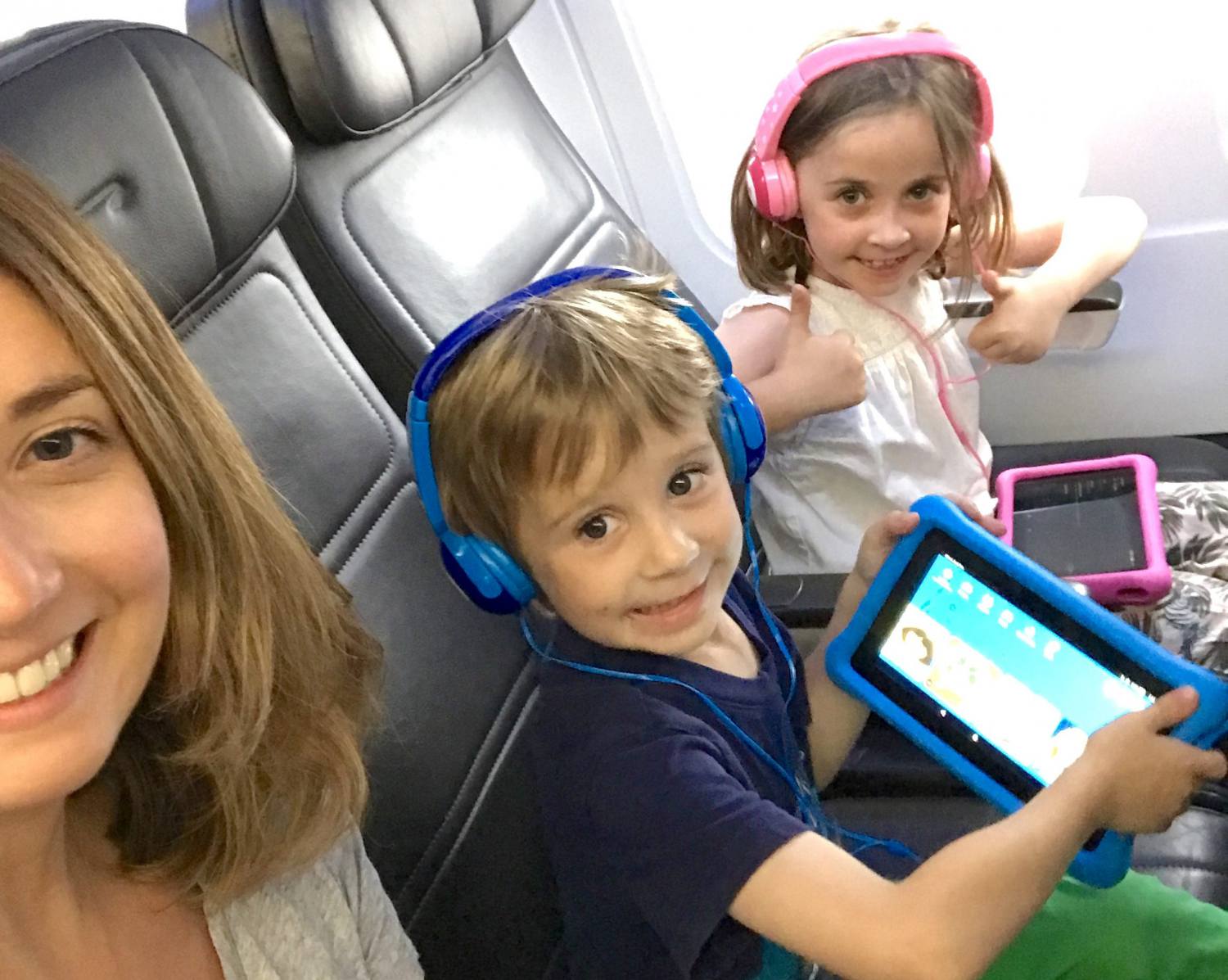 Elfie was given her first Fire Tablet a couple of months ago, and within 2 weeks I purchased an additional one so Hux could enjoy his own: I was that impressed.

They’re a really good value for money device – £99.99 on Amazon, obviously (£69.99 on Prime day!) – that gives access to a huge variety of apps for entertainment, gaming and education. And, hugely importantly for me as I have one particularly inquisitive child who’s pretty adept at Googling and YouTubing, all content available on the tablet for the children is entirely age-appropriate.

The apps are all from big names like the BBC and Disney and include our family favourites  – Paw Patrol, Peppa Pig and Toy Story are just a few that my two enjoy playing with. You can select educational apps or the more ‘fun’ ones, with Peppa Pig’s Mrs Chicken being my own personal fave, and Hux loving anything to do with Batman, LEGO, or LEGO Batman. Elfie’s well into the Disney apps and, despite my efforts to the contrary, can’t get enough of the Shopkins games. Click through here to see the insane range of apps they have available, and remember there are apps for us adults too, like Netflix and the BBC iPlayer.

My favourite feature of this tablet is the way I’m able to monitor what the kids are doing. I can remotely log in to my Amazon account using my web browser and check up how many hours of each activity the children have done that week, and exactly the games, movies or books they’ve been enjoying. I’m also able to set targets and time restraints on their profiles; for example, the kids can only play on a game after fifteen minutes reading a book, and the tablets automatically turn themselves off come 7pm so there’s no bedtime battles. 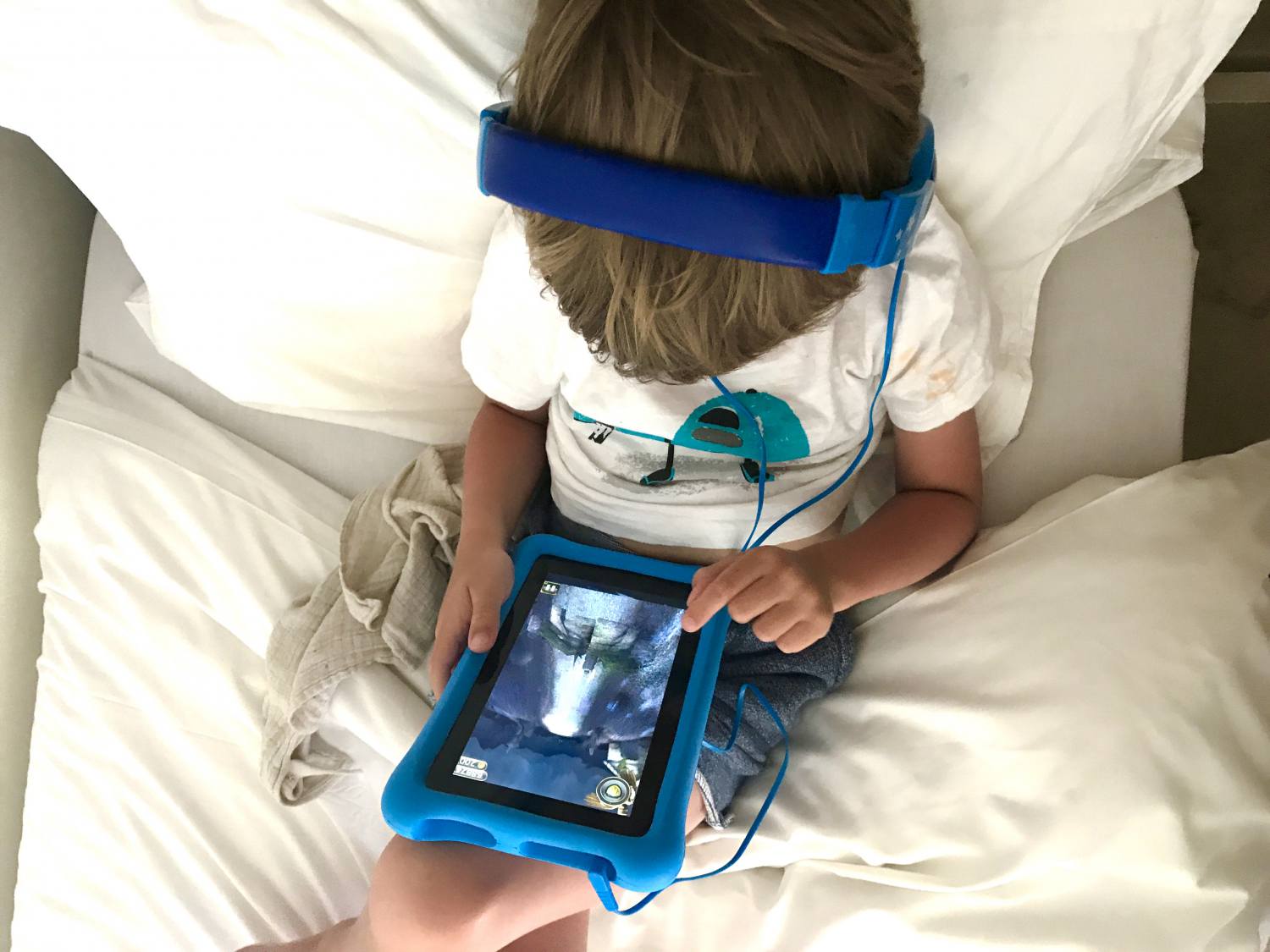 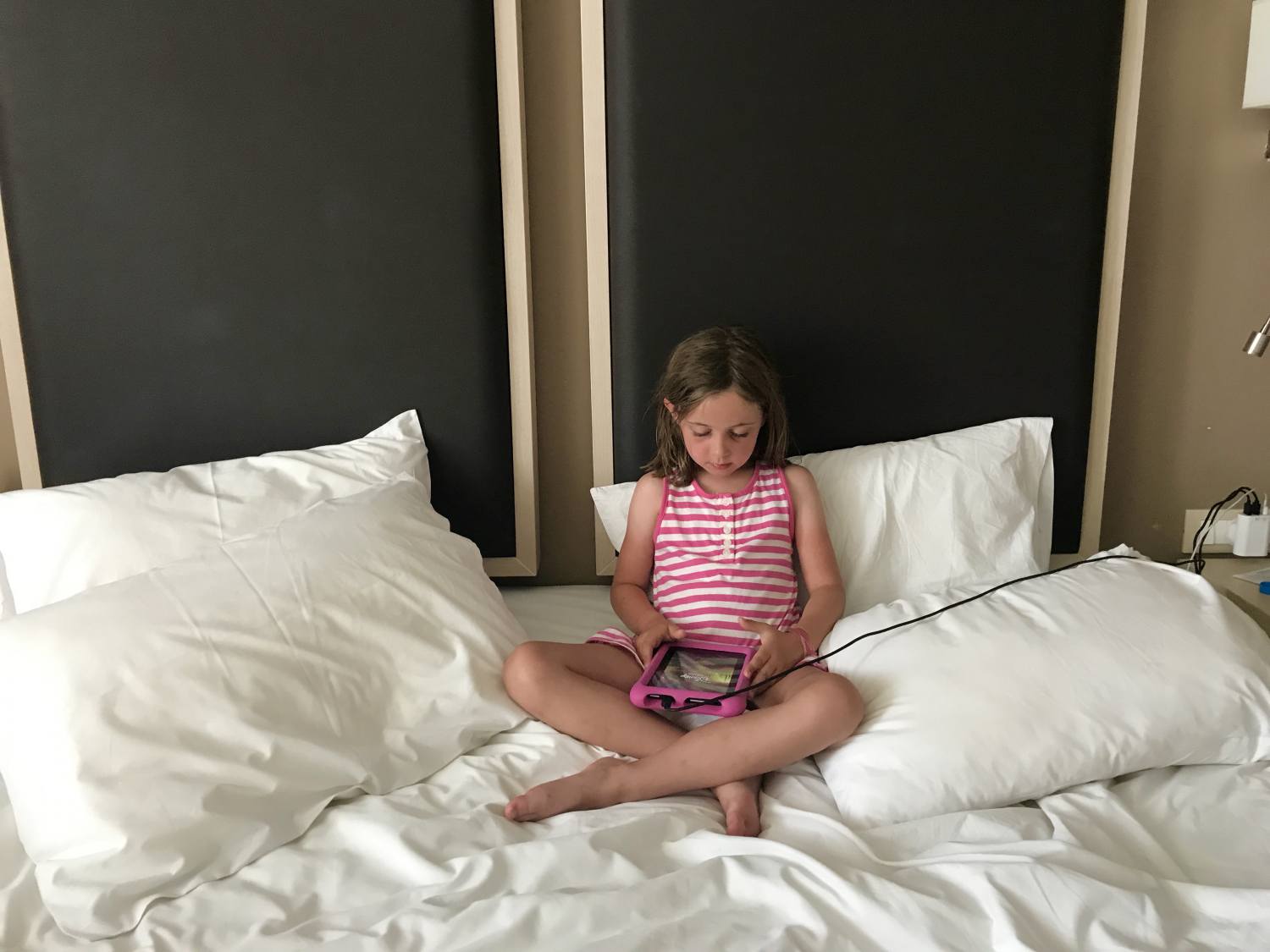 Plus they come with massive bumpers so even Hux, the clumsiest child in the world, hasn’t managed to damage his tablet yet (though Amazon have a no-quibble replacement guarantee should this happen!).

Put Online Dangers In The Past

I like to think our Amazon Fire tablets really did make our flight a lot less painful this holiday, not just for me but for the other passengers on board, too – though Hux did have a worrying urge to practice the ‘brace’ position on and off for the entire homeward four hours which I found slightly sinister.

They were also brilliant as a distraction tool after a busy day spent at the pool. On some days temperatures reached the heady heights of 45 degrees, unbearable for me and something that sent the smaller members of my family slightly bonkers. To preserve everyone’s sanity I insisted on an hour or two of ‘quiet time’ back in our air-conditioned room most days, which was a lot easier with the lure of the tablets with their fun games over CNN and BBC World News on our hotel television.

Today – July 11th – it’s Amazon Prime day! Exclusively for Prime members, there’ll be black Friday-style 30 hours of deals for all Amazon Prime customers, with prices of some of Amazon’s bestsellers slashed. I’m wondering if I should pick up another Fire for me… the new improved Fire 7 has just been launched. It’s got an improved screen and is thinner than the previous generation and has voice assisted Alexa as well. Plus, you get access to the app store with 800,000 kids games and apps that parents will enjoy too (like Netflix and the BBC!) and it’s only £29.99 for Prime Day. It’s a no-brainer, really!

Thank-you Amazon for working with MTT.

How To Pack For Your Kids To Go On Holiday

I Know I’m Prone To Exaggeration But That Was The Best Holiday We’ve Ever Been On: Mark Warner Paleros

How To Get a Summer Glow (Without a Smidgen of Sun)

The Best (and Quickest!) Way To Double Cleanse